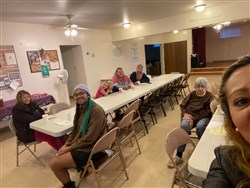 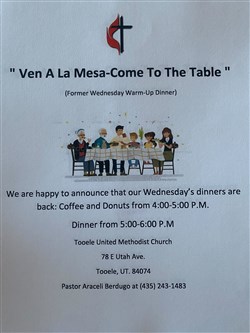 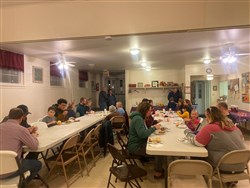 This dinners are done with collaboration of other churches, community groups and businesses 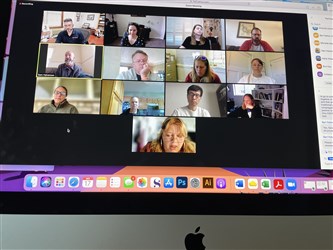 The Perkins School of Youth Ministry, under the direction of The Office of External Programs at Perkins School of Theology at SMU, coordinates training programs exclusively designed resource those in the church whose ministries focus on youth and young adults. The instructors at PSYM did an exclusive online training for youth workers in the Mountain Sky Conference over a weekend is September in which about ten youth workers and pastors from around the conference participated. 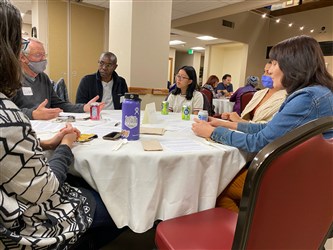 Littleton UMC is involved in an allyship with Trinity UMC on anti-racism. That effort bloomed into a Dinner and Dialogue on Race held at Trinity UMC, where 8 tables of 8 people developed new relationships with their tablemates from the Denver Metro area and engaged in meaningful conversations about racial relationships and racial justice.  Littleton UMC was awarded a $500 Culture of Courageous Leadership Grant, which members of the church matched for $500.  This money was used to purchase food for the dinners, catered by minority owned restaurants in the Denver area.

The Prairie Campus of First UMC in Colorado Springs showed Zootopia to families in the community as a way of extending the discussion about inclusion, stereotypes, prejudice and allyship to kids. The “Pizza and a Movie” night was held Friday night, October 15th at the Banning Lewis Prep Academy to a group of about 25 and the discussion was led by Director of Children’s Ministry Alex Kerce.

The Anti-Racism Advocacy Group co-sponsored by Prairie Campus and Peoples UMC was awarded a grant from The Mountain Sky Conference Leadership Development Team “for congregational work in building a culture of courageous leadership in the areas of anti-racism and/or laity leadership” that was used to fund this event.

From the largest elephant to the smallest shrew, the city of Zootopia is a mammal metropolis where various animals live and thrive. When Judy Hopps becomes the first rabbit to join the police force, she quickly learns how tough it is to enforce the law. Determined to prove herself, Judy jumps at the opportunity to solve a mysterious case. Unfortunately, that means working with Nick Wilde, a wily fox who makes her job even harder.

Families brought their blankets and lawn chairs to the gym of the school to settle in under the large screen after enjoying pizza, drinks and bunny crackers together in the cafeteria.  Alex introduced the movie to the kids by sharing some concepts like “stereotyping” and “prejudice” and told them what to watch for in the movie.  She communicated to the kids in a way that they could grasp, using simple and clear definitions of terms with examples provided by the kids themselves.

After the movie, Alex led a discussion and the kids shared openly and freely their understanding of the concepts of stereotypes, bullying, inclusion, prejudice, and being a good friend. They gave examples from the movie and from their own lives. It was heartwarming to see how much even the youngest among us understood.  It’s never too early to start teaching about how to love our neighbors without exception.  The program Alex led is provided below. This was such a great move and discussion that we strongly recommend other groups try this!  Feel free to use this discussion guide!

“Our young friends, Alexis (11) and Gabby (9) had both seen it before, but Alex’s discussion gave them both more to think about. Excellent presentation!” 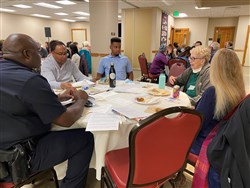 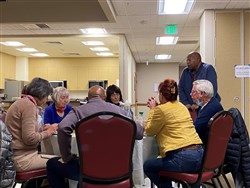 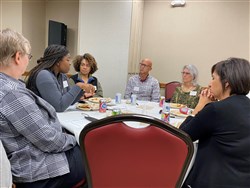 In 2020, following the untimely suffering and death of George Floyd, Trinity United Method Church Senior Pastor Ken Brown recognized that there was a spiritual element absent in the nation’s mournful outpouring about Mr. Floyd’s demise.  He, along with Trinity colleagues Deb Meyer and Joe Mazza, invited congregants and associated churches to convene on a regular basis to work toward becoming engaged Anti-Racist Allies.  After weekly Zoom gatherings for several months, the Anti-Racist Allies decided to deepen their anti-racist realities by engaging in meaningful face-to-face relations across race in the metro area. Using the U. S. Department of Justice Community Relations Service Guide entitled “Dialogues Across Race,” on September 14, 2021 Trinity Dinner and Dialogue About Race began a 5-series gathering.  Seventy-two individuals from various groups around the Denver metro area, including: Trinity, Judaism Your Way, Littleton United Methodist Church, members from the Denver Police Department, St. Luke’s United Methodist Church, students from the Community College of Denver, Scott Methodist Church, and affiliated friends regularly participated in the every-other-week conversations. Each session featured a meal catered by a local BIPOC-owned business with funding from individual donors, partner churches, ACLU-Denver, and grants including a grant from Culture of Courageous Leadership.   The series culminated on November 9th when participants ventured individually and as small groups to further their Anti-Racist Allyship actions.  To date, many tablemates have declared that they will continue their cross-racial relationships with each other into the future. 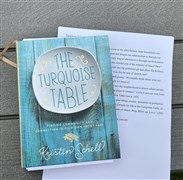 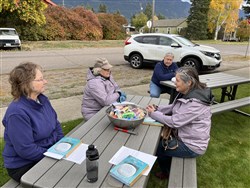 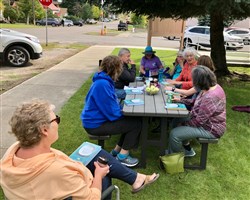 Columbia Falls UMC in Columbia Falls, MT utilized Courageous Leadership grant money from the Leadership Development team to help build connections with their neighborhood and spark creative ministry opportunities in the future. After overcoming a summer of pandemic supply chain issues, the church was able to purchase two portable picnic tables and fifteen copies of "The Turquoise Table," by Kristin Schell. The book invites readers to put picnic tables outside in their communities, build relationships with neighbors, and cultivate community as "front yard people." Folks at Columbia Falls studied the book, hosted an ice cream social for their church and neighbors, and plans to explore installing a permanent picnic table outside their building in the spring of 2022. 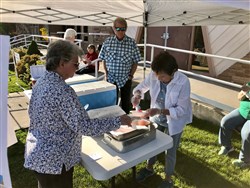 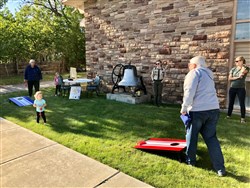 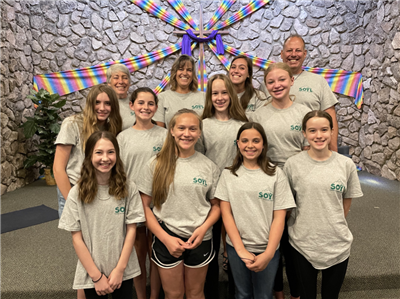 At UMC Johnstown, we had our first Summit on Youth Leadership from June 7-11, 2021 from 11 am to 2 pm each day. We had a presentation on Friday at 7 pm for family and friends. There were 9 middle school attendees and 2 high schoolers who attended when they were able. We had 4 youth group adults working each day, with Pastor Jeremy also joining us when he could. Amy Mayer designed a logo and t-shirts were made for each of us.

On Monday, the kids picked passion projects, and interestingly, they all chose to work on gender inequality. They all began to plan how they would present their projects. Pastor Jeremy spoke on having a WHY as a leader. Thanks to a grant Jeremy helped secure through the conference, we were able to provide lunch each day.

On Tuesday, groups presented leadership crests that they had designed. Molly’s dear friend MacKenzie Maher, a graduate student at DU presented on how to do authentic research.

On Wednesday, we were joined by Kimberly Robertson from Johnstown, Pennsylvania via Zoom. Kimberly taught us about non-profit fundraising and elevator pitches. The youth continued to research and design their projects. We often started and ended our days with fun games.

On Thursday, Alan Gibson taught us all about public speaking. We learned some great strategies. We had a great discussion about dress codes in schools. We also played a fun game.

On Friday, after playing a game that had some of us laughing so hard we cried, Dr. Lori Peterson taught us about self determination and setting goals.

On Friday night, Sydney, Delaney, Charlotte, and Nariah did a skit about gender inequality and how it relates to pay. Ella and Opal did a talk show and power point about dress codes and how girls seem to be targeted with these more than boys. Finally Hope, Haley, and Ashleigh did a dance to represent the fight to vote for women. Kayla helped them with their speech at the end. We were all grateful to Gavin for running sound and tech for us that night.