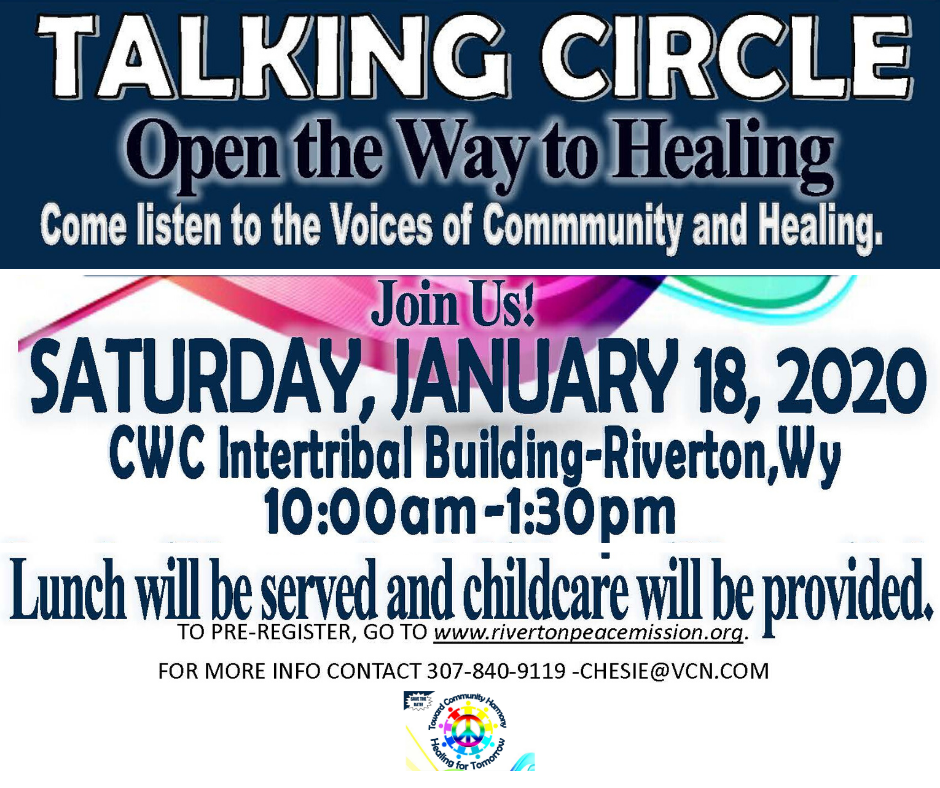 We invite everyone in our community to come together to seek healing and understanding in the aftermath of the killing of Andy Antelope at Riverton Walmart on Saturday, Sept. 21 and for ways of preventing and addressing such future incidents. We are going to use the practice of a "talking circle" to foster mutual listening, understanding, and respect.

This is a FREE event. Daycare services will be available. Lunch will be provided.

The Riverton Peace Mission was recently incorporated (2019) and is just getting off the ground.  One of the founders is Ron Howard, a Northern Arapaho teacher, artist and actor who has organized peace marches the last five years in response to the shootings by a white city employee in 2015 of two unarmed Northern Arapaho men and clients at the Center of Hope, a detox center in Riverton, Wyoming.  Ron is married and the father of two children.

The other co-founder is Chesie Lee, a white woman, the former director of the Wyoming Association of Churches (WAC) and life-long activist who moved to Riverton in 2013 in order to help facilitate a WAC resolution to connect with, listen to and stand with Native Americans in Wyoming.

There is only one reservation in Wyoming, the Wind River Indian Reservation, located in west-central Wyoming, for the two sovereign nations of the Northern Arapaho Tribe and Eastern Shoshone Tribe.  Riverton is a city founded by white settlers in the early 1900’s with the approval of U.S. Congress, but without the approval of the tribes or compensation to them.  Although surrounded by the reservation, it remains in dispute whether Riverton is a part of the Wind River Indian Reservation.  There is an on-going history of racism and discrimination, while the community is economically, socially and culturally enriched by the presence of Native people.