Congregations across the connection are invited to celebrate the 50th anniversary commemorating the event on April 23, 1968, when leaders of the Evangelical United Brethren Church and The Methodist Church declared the creation of a new denomination, The United Methodist Church.

With the words “Lord of the Church, we are united in Thee, in Thy Church and now in The United Methodist Church,” the new denomination was birthed at the constituting General Conference being held that year in Dallas. The words, said in unison over joined hands, by Bishop Reuben H. Mueller of the Evangelical United Brethren Church and Bishop Lloyd C. Wicke of The Methodist Church, signified the formation of one of the largest denominations in the world, representing 53 countries. The photo below is from that conference.

“We are celebrating 50 years since a historic coming together among likeminded Christians of different regions, languages, cultures and customs because of their common grounding in Wesleyan spirituality and practice,” said the Rev. Fred Day, general secretary of the General Commission of Archives and History. “The historical event also marks the formation of a church free from the institutionalized segregation of the former Central Jurisdiction. Now white and African-American United Methodists lived into a Church sharing annual conferences, same bishops and same appointment systems as never before. 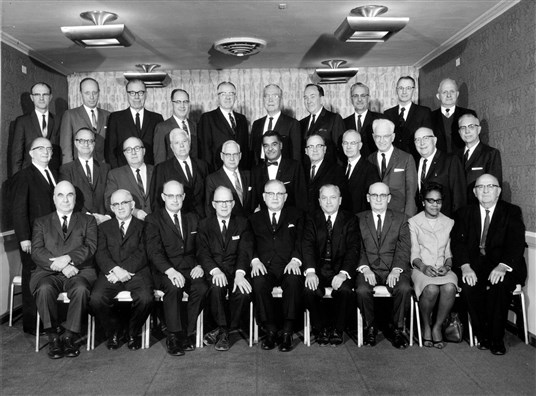 Commemorative events are set to occur at the conference, district and local church levels beginning April 22, the Sunday before the April 23 anniversary, through May 20, Heritage Sunday. This year, the Heritage Sunday theme is “Jubilee: The 50th Anniversary of The United Methodist Church,” giving congregations an opportunity to reflect on the importance of history while also vision casting about the future.

Numerous resources have been developed and made available specifically for the 50th anniversary of the uniting conference, including liturgical materials, the original uniting conference video, and a reference guide to the church’s history. UMC.org, the official website of The United Methodist Church, is featuring anniversary content at UMC.org/umc50. A hashtag -- #UMC50 – is being used for all anniversary-themed content across social media channels and the denomination’s official Facebook page is featuring Throwback Thursday (#TBT) content from the momentous event.

“We hope United Methodists across the connection will use the teaching and worship resources provided in this jubilee year,” Day said.