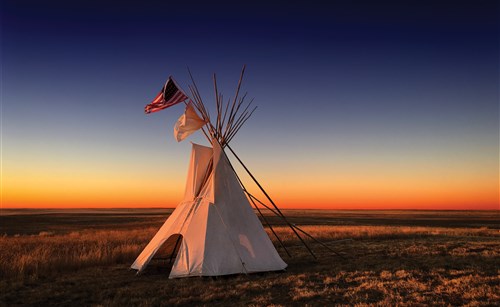 DENVER  (July 25, 2022)  — On November 19, 2022, a new exhibition “The Sand Creek Massacre: The Betrayal that Changed Cheyenne and Arapaho People Forever,” opens at the History Colorado Center in Denver. The exhibition will recount the deadliest day in Colorado history—November 29, 1864—when U.S. troops brutally attacked a peaceful village of Cheyenne and Arapaho who were promised military protection. More than 230 women, children and elders were killed. The exhibition is being made in deep consultation with representatives from the Cheyenne and Arapaho tribes. For the first time, History Colorado will be telling the full story of the Sand Creek Massacre based on tribal accounts and oral histories from the descendants of those who survived that terrible day.

“This exhibition will include information about the lives of the Cheyenne and Arapaho people before the massacre, life today and our efforts to remember the massacre,” explains Fred Mosqueda (Southern Arapaho), a tribal historian and Sand Creek descendant.

The exhibition is the result of a ten-year partnership process beginning in 2012 between History Colorado and the three tribal nations. This new project spotlights the living culture of the Cheyenne and Arapaho, two separate tribes with distinct histories that were bound together forever after the tragedy at Sand Creek. After the massacre, the Cheyenne and Arapaho people were forced to leave Colorado. Today they exist as three sovereign tribal nations in Montana, Oklahoma and Wyoming. The exhibit ends with a look at the three Cheyenne and Arapaho nations today, and represents ongoing efforts to commemorate, educate, and heal from the Massacre.

“It was genocide. We need to educate the people and heal our people so that something like this won’t happen again,” said Chester Whiteman (Southern Cheyenne), “I hope this exhibit will get people to understand that we’re all human.”

The exhibition will enable visitors to experience:

Each exhibition element is being vetted and approved by tribal representatives. Following proper protocol, this consultation with the three sovereign tribal governments ensures the display respects the memories of the victims. In fact, at the request of the tribes, no artifacts from the day or site of the Massacre will be in the exhibition.

History Colorado’s co-creators and designated tribal representatives include: Otto Braided Hair, Jr. of the Northern Cheyenne Tribe of the Northern Cheyenne Reservation, Montana; Ben Ridgley, Gail Ridgely, and Ryan Ortiz of the Northern Arapaho Tribe of the Wind River Reservation, Wyoming; and Fred Mosqueda, Chester Whiteman and Eugene Blackbear of the Cheyenne and Arapaho Tribes, Oklahoma. The exhibit team is also consulting with other scholars on the Massacre’s national significance, including Dr. Ari Kelman, author of​ A Misplaced Massacre: Struggling Over the Memory of Sand Creek (Harvard, 2015);  Dr. Alexa Roberts, the first Superintendent of the Sand Creek Massacre National Historic Site; and Dr. Laurie Arnold (Sinixt Band of the Colville Confederated Tribes), director of Native American Studies at Gonzaga University.

“It’s been great to work with Dr. Kelman and Dr. Roberts, who are walking textbooks on the Sand Creek Massacre, to strengthen this exhibition,” said Ridgely.

“We've had difficult times in the past with History Colorado. This exhibition shows commitment and dedication," stated Otto Braided Hair, Jr. (Northern Cheyenne). In 2012, History Colorado opened a previous exhibit to chronicle the Sand Creek Massacre. Due to inadequate tribal consultation, the exhibit closed.

Since then, History Colorado staff have worked closely with the descendants of the Massacre’s victims to repair and re-establish relationships. Exhibition research and consultation is ongoing, and includes dozens of phone and in-person meetings as well as trips to each of the three tribal communities. This collaboration has been highly productive and ensures the exhibition will properly honor tribal perspectives and represent the Cheyenne and Arapaho’s distinct cultures, traditions and history.

“The Sand Creek Massacre is a Colorado tragedy with national importance,” said Sam Bock, historian and lead exhibit developer for this exhibition. “The soldiers who attacked the peaceful camp were U.S. troops, raised under the Union banner during the Civil War. Their goal was to exterminate the original people of this land.”

“We have to acknowledge our history—including the darkest chapters—in order to heal and move forward," said U.S. Senator John Hickenlooper, who as Governor formally apologized for the Sand Creek Massacre on behalf of the State of Colorado. “This exhibit will ensure we never forget the horrific atrocity at Sand Creek, and by doing so help prevent us from repeating it.”

Commemorative efforts are ongoing in Colorado, and since 1999 have included the Sand Creek Massacre Spiritual Healing Run from the massacre site to Denver each fall. In 1909, a now-removed statue at Colorado’s state capitol incorrectly referred to the massacre as a battle. In 2002, the state installed a second plaque explaining that the atrocity was a massacre and not a battle. Members of the Cheyenne and Arapaho tribes are currently working with the Colorado Commission on Indian Affairs on a memorial at the Colorado State Capitol that will signify the resilience of tribal people in the face of the losses they endured.

“The ​Sand Creek Massacre​ exhibition will demonstrate that people can work humbly together to remember and begin to heal from atrocities and betrayals such as this,” said Shannon Voirol, Sand Creek Massacre project director at History Colorado. “It will also offer universal, timely lessons that fear, racism and stereotyping can, and do, lead to catastrophic consequences.”

“The Sand Creek Massacre: The Betrayal that Changed Cheyenne and Arapaho People Forever” was made possible by substantial grants from the National Endowment for the Humanities, the Institute of Museum and Library Services. The exhibition will open to the public on November 19, 2022. Visitors of the History Colorado Center, along with tens of thousands of school-aged children on field trips, will have the option to access the exhibition’s carefully presented, powerful content.

The Sand Creek Massacre National Historic Site, located in rural southeastern Colorado, was authorized in the fall of 2000 in collaboration with the Cheyenne and Arapaho tribes and dedicated in April 2007. The site’s authorizing legislation directs NPS to manage the cultural landscape and to share the Massacre’s history with the public. The park is open Thursday through Monday, 9:00 am through 4:00 pm, and closed Tuesday and Wednesday. Visit the site online to plan your visit: www.nps.gov/sand.

“The Sand Creek Massacre evokes many feelings–loss, suffering, pain, and survival–universal emotions which link this tiny spot in southeastern Colorado to people and places far beyond Sand Creek,” says Janet Frederick, superintendent of the Sand Creek Massacre National Historic Site. “We think History Colorado's exhibition will give the public an introduction and the impetus to come out to Eads and experience the site firsthand.”

About History Colorado
History Colorado is a division of the Colorado Department of Higher Education and a 501(c)3 non-profit that serves more than 75,000 students and 500,000 people in Colorado each year. It is a 143-year-old institution that operates Colorado’s oldest museum, ten additional museums and historic sites, a free public research center, the Office of Archaeology and Historic Preservation, and the History Colorado State Historical Fund (SHF), which is the nation’s largest preservation program of its kind. More than 70% of SHF grants are allocated in rural areas of the state.

History Colorado’s mission is to create a better future for Colorado by inspiring wonder in our past. We serve as the state’s memory, preserving and sharing the places, stories, and material culture of Colorado through educational programs, historic preservation grants, collecting, outreach to Colorado communities, the History Colorado Center and Stephen H. Hart Research Center in Denver, and 10 other museums and historic attractions statewide. History Colorado is one of only six Smithsonian Affiliates in Colorado. Visit HistoryColorado.org, or call 303-HISTORY, for more information.