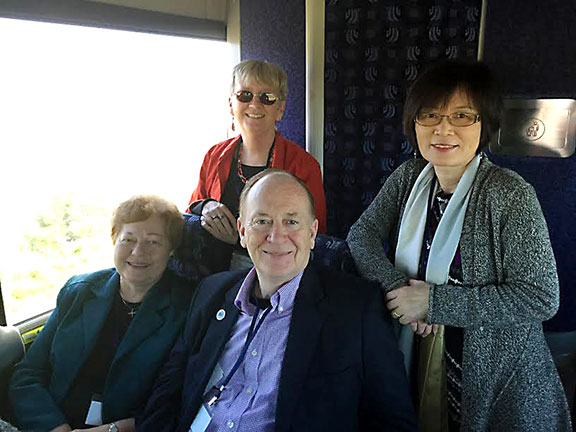 Story and photo contributed by the Rev. Donald E. Messer

An Ecumenical Civil Rights Pilgrimage of 46 laity and clergy, that started at the birthplace of Baptist preacher Martin Luther King, Jr., in Atlanta, and ended at the motel where he was martyred in Memphis, traced not only the struggles of the past but focused on contemporary issues of justice and equality.

The civil rights pilgrims worshipped at Sixteenth Street Baptist Church in Birmingham, where on September 14, 1963, four young girls were murdered when the church was bombed by segregationists. The face of Jesus was destroyed in a stained glass window. At the time, Birmingham was one of the most segregated cities in America -- even the professional washing of clothes was segregated along with playing dominos! The bombing outraged the world and efforts intensified to overcome white racism.

50th Anniversary of the Selma March

A special highlight of the journey was participating in the 50th Anniversary of the March from Selma to Montgomery that secured the historic Voting Rights Legislation. An estimated crowd of 40,000, overwhelmingly African-American, gathered in Selma. Rep. John Lewis of Georgia, who led the initial march on Bloody Sunday, March 8, 1965, introduced President Barack Obama and former President George W. Bush. President Obama challenged the crowd of 40,000, to restore the gutted voting rights legislation, increase voting rates, and reform the criminal justice system, calling for "the young and fearless at heart" to cross new bridges of freedom, justice and equality.

Accompanying the ecumenical pilgrimage were three veterans of marching in Selma -- Rev. Kent Millard of Indianapolis, Indiana, Rev. Kenneth Steigler of Wake Forest, North Carolina, and Rev. Donald E. Messer of Centennial, Colorado. All three were seminarians in 1965 at Boston University School of Theology, when 83 students left their studies and classrooms to board two buses and cars to respond to Martin Luther King's call for voluntary non-violent reinforcements to join protest demonstrations. Each recounted their own stories of fear and trepidation, as they faced the unknown possibility of being clubbed, beaten, jailed or even killed as they headed South, labelled at the time as "communist clergy agitators" by segregation church leaders who reviled the National Council of Churches for its advocacy of the Selma demonstrations.

Past Struggles Relate To Contemporary Challenges

On the first day of the trip, at the new Civil and Human Rights Museum in Atlanta, persons were challenged to view the interrelationship of past struggles for civil rights with the global challenge of securing freedom and justice around the globe. Genocides ranging from the Holocaust to Rwanda and Cambodia are illustrated along with current movements to secure human rights globally for lesbian, gay, bi-sexual and transgender persons. Videos displaying human rights violations related to human trafficking, HIV and AIDS stigmatization, immigration protection, violence against women, and other issues were prominently featured.

After linking arms and singing "We Shall Overcome" in the sanctuary of Montgomery’s Dexter Street Baptist Church, where Martin Luther King pastored, Garrett-Evangelical seminarian Sam Mutschelknaus led in prayer, asking God's energizing grace for the "vision and courage to promote human rights globally."

Relating faith to justice and love to equality repeatedly emerged during the trip. Linda Bales Todd of Dayton, Ohio, remarked that "Dr. King and the other Baptist preachers articulated a social gospel that dynamically changed both hearts and the culture." Rev. Youngsook Kang of Denver, Colorado, noted "that though I was born in South Korea, the African-American legacy of loving justice has transformed the expectations of the whole world."

Rev. Ingrid McIntyre of Nashville, Tennessee, pointed out that poverty still persists in Selma and throughout the region. Over 10% of Selma's population is unemployed and many downtown businesses are deserted and boarded up. She noted signs that read "Selma needs quality housing.” More than 40% of the families and 67% of the children in the country live below the poverty line. Economic opportunity is essential lest other freedom is eroded.

The ecumenical pilgrims concluded the trip with new appreciation for the Baptist preachers and laity, who along with Dr. King, envisioned and strategized successfully to change America forever. Sensitive to the human rights interrelationship of past civil struggles with contemporary global challenges, individuals in a closing session at Christ United Methodist Church in Memphis, Tennessee, linked arms, sang, and pledged to work to overcome injustice and inequality in their homes, churches, and communities. In the words of one African-American woman, "the movement continues."

The Rev. Donald E. Messer is an American United Methodist theologian and author, and former college and seminary president. He is known for his work to combat world hunger and HIV/AIDS. This story first appeared online in the Office of Christian Unity and Interreligious Relationships page of the Council of Bishops website.