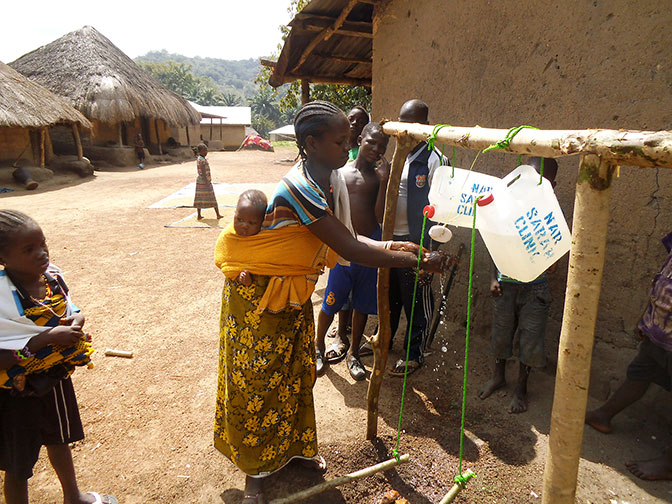 Above: One of 60 hand-washing stations called "tippy-taps" were provided by Nar Sarah Medical Clinic in Kabala to help battle Ebola.

In late May of 2014, 25 members on three different mission teams were scheduled to travel to Sierra Leone. However, their trip was cancelled due to the outbreak of Ebola. One team was scheduled to work at Heritage UMC High School, one with the new Kabala UMC Church and one with Nar Sarah Medical Clinic and the Kabala UMC School for the Blind. Due to Ebola, schools were closed, public gatherings were limited, transportation and movement was restricted, burial customs were banned or altered and many hospitals and medical clinics had to close due to limited resources to protect against and treat Ebola.

However, Nar Sarah Medical Clinic stayed open and joined with the local Ebola Task Force in Kabala to fight back against Ebola at the beginning of the outbreak. Road blocks were established on roads leading into the district (county) All travelers were required to have their temperature taken and to wash their hands in chlorinated water. Nar Sarah presented Ebola education programs on the radio and all clinic patients were taught the dangers of Ebola. Sixty hand-washing stations (tippy-taps) were built in the community and supplied with chlorinated (when possible) water, and soap also was provided.

Nar Sarah Clinic reached out for help from supporters in the U.S. to help them in the fight to save lives. More than 250 individuals from many states and local churches responded by donating $100,000 within three months. With that money, Nar Sarah purchased four motor bikes and a Toyota Land Cruiser to reach several remote and isolated villages. Ebola health workers were hired, trained and paid. Supplies were purchased to build tippy-taps in the villages, in addition to preventive medicines and vitamins to treat diseases that weaken the body. Finally, rice was purchased to feed the hungry.

The trained health workers visited villages -- some only accessible by paths or four-wheel drive vehicles -- in four Chiefdoms and distributed 1,500 pounds of rice, built 65 tippy-taps and distributed 320 bars of soap. In the process, they found some villages that had no idea Ebola existed. Nar Sarah presented more radio programs to educate the people about Ebola, and did training classes in each village visited. This program continues today.

Because of the effort by Nar Sarah and the local Ebola Task Force only four cases of Ebola were diagnosed in Kabala, a community of approximately 25,000. The infected persons were immediately isolated and sent to treatment centers. The people exposed were isolated in a school building for 21 days to protect the rest of the community. No one died of Ebola in Kabala. Many miles away, on a border with a badly infected district, 90 cases of Ebola were detected with some deaths, but that outbreak was contained, and did not spread further into the district where Nar Sarah and Kabala is located.

Time Magazine named the Ebola fighters as Person of the Year in 2014. The donors in the Rocky Mountain area and the health workers of Nar Sarah and Kabala can lay claim to that honor, although this story will never be seen or heard. Congratulations. Your actions fulfilled the words found in Matthew 25:35-40. 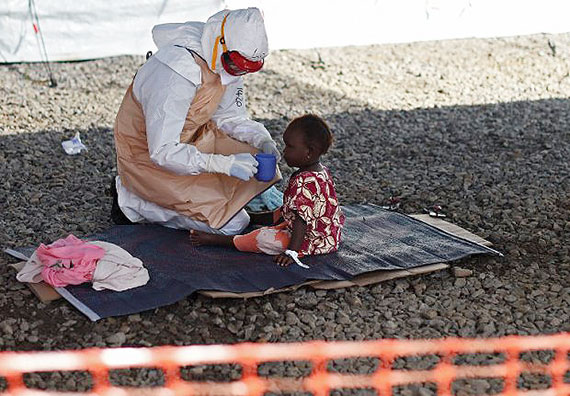