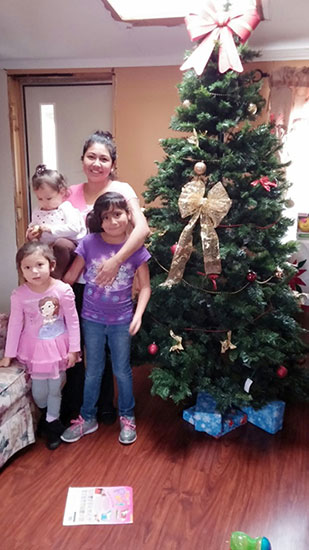 UMCOR Case Manager Melinda Ciricillo is an integral part in making one family’s Christmas a little brighter this year. Andrea Luciano and her family, consisting of her mother and four children, lost everything they had in the September 2013 Colorado flood. As the Luciano family case manager through Weld Recovers, Melinda has been helping the family recover from the disaster.

One thing the family did not have, and that the children wanted more than anything this holiday season, is a Christmas tree. Coincidentally, a tree became available in a very uncommon way.

In a matter of minutes, Stuft Burger contacted the United Way and they contacted Melinda in the Weld Recovers office. They asked Melinda if she could think of any of her clients who was a family in need and would appreciate a tree. She immediately thought of the perfect family: the Luciano family. The Luciano family is very appreciative and thankful for the tree. They are also thankful for their case manager, Melinda. Without her, there wouldn’t be much to celebrate this Christmas.

Read a full story about the stolen Christmas tree in The Greeley Tribune.

Click here to get more information about the Colorado UMCOR team and its continuing work with helping flood survivors.