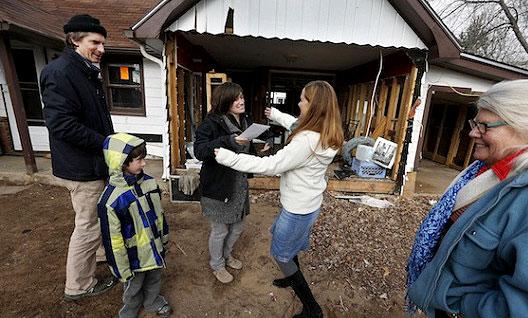 Above: The Lyons Emergency Assistance Fund (LEAF) helps families in the Town of Lyons get back on their feet after the 2013 floods. Photo courtesy Sara Goodwin

Sept. 13, 2013 stands out significantly in the minds of many Colorado residents. After five days of torrential rains, rivers along the northern Colorado Front Range area experienced massive flooding. The flooding killed 10 people, injuring at least 16,000 others. At least 50 bridges in the state were severely damaged or destroyed with 200 miles of roads impacted by the flooding. Access to communities was cut off in many cases. Businesses, from tourist to agriculture, were severely impacted. Eleven counties were designated major disaster areas qualifying for individual assistance by the Federal Emergency Management Association (FEMA).

Located in Boulder County at the confluence of the North St. Vrain and South St. Vrain Creeks, the Town of Lyons sustained some of the worst flood damage in the state. With the destruction of two mobile home parks and much of the Confluence neighborhood, the low-income population of Lyons was particularly hard hit. Many households and businesses did not have flood insurance because they lay outside of the flood plain. Approximately one-fourth of all Lyons households and over half of those who are still displaced a year later had a decrease in income as a result of the flood. About 11% of all Lyons households and 15% of still displaced households expect this loss to be permanent.

Because the floods were so disastrous, some might think that one person or one little church in a small Colorado town can’t possibly make a difference, but that is not the case. With Methodist Pastor Emily Flemming’s guidance, the people of Lyons Community Church (Methodist) in Lyons have made a significant difference in flood recovery for the Town of Lyons and surrounding communities.

In addition to the efforts of individual church members volunteering and using the church for meetings, the Lyons Community Church took the lead in three major programs to help those impacted by the floods: Camp Noah, Project:KIDS and LEAF.

Part of this recovery is to focus on the emotional needs of the community." -Pastor Emily Flemming, Lyons Community Church, Lyons, Colo.

Back in July 2014, Flemming and the Lyons Community Church made it possible for children impacted by the September flood to learn how to cope with and move on from the disaster through skits, crafts, group activities and rest at Camp Noah.

Camp Noah was launched in 1997 as a Lutheran vacation bible school in Minnesota in response to flooding in the Red River Valley. The program was taken to victims of Hurricane Katrina in 2006. The group then launched a nonprofit and now travels the U.S. hosting camps for children impacted by natural disasters.

Nearly 60 kids from the Lyons area, kindergarten through sixth grade, attended the camp, which was held at the local Church of Latter Day Saints. The camp was paid for in part by the Rocky Mountain Conference of the United Methodist Church, United Methodist Committee on Relief (UMCOR), Red Cross, and Lyons Community Foundation.

“Camp Noah not only helped Lyons’ kids deal with the disaster productively, but it offered our church an opportunity to connect with the local Church of Latter Day Saints for the first time in a deep and meaningful way. That collaboration has led to further partnerships, including the temporary housing of our food pantry in their facility,” said Flemming. “We look forward to continuing to build interfaith relationships in Lyons and beyond.”

Flemming noted that there was an outpouring of gratitude from the wider community for bringing Camp Noah to Lyons, especially families with young children recovering from the disaster. Camp Noah taught the kids to focus on their strengths, gave them tools and a sense of preparedness with which to face future problems. Flemming believes those skills are crucial in creating strong and resilient individuals, regardless of any future disasters they may face.

“We heard a lot of dramatic stories from the kids impacted by the flood,” said Flemming. “But we also saw a lot of hope in their eyes as we neared the end of the camp. The kids pulled together and took care of each other. They realized Camp Noah was a safe place where they could share their unique experiences caused by the flood.”

Another project initiated by Flemming and her colleagues is Project:KIDS. Project:KIDS is a monthly program that encourages children ages 12 and younger to volunteer in their community and to be a good neighbor.

In October, a group of 20 kids hand-delivered birdhouses in home-decorated bags to those who were hit hardest by the flood, the Confluence neighborhood. Each bag carried a note that said, “The kids of Lyons, CO are happy to be your neighbors, and wish you all the best as you return home!” Many of the recipients were touched by the thoughtfulness and creativity demonstrated by the young volunteers.

In November, with a theme of "Grounded in Gratitude," the children will paint and deliver Lyons Rocks! to thank local people who helped them during the disaster and recovery, as well as in their everyday lives. It will be an opportunity for the kids of Lyons to give back to those who have helped them, and just in time for Thanksgiving.

“Project:KIDS was created in response to the community’s request for an opportunity for kids under 12 to volunteer to help in the recovery and rebuilding of the town,” Flemming said. “Part of this recovery is to focus on the emotional needs of the community, and that’s what Project:KIDS strives to do. It gives an opportunity for the young people in town to get together, focus on important values, and serve the people in our town. In Lyons, we know and take care of our neighbors, and fostering that value in our young people needs to be intentional.”

Flemming is also involved in the Lyons Emergency Assistance Fund (LEAF) as Co-Executive Director, along with Co-Executive Director and Lyons Community Church member Emily Dusel. LEAF moves Lyons area residents towards self-sufficiency, especially in the aftermath of natural disaster, like the September flood, by providing basic needs and homeless-prevention services where other available support is insufficient.

LEAF, a fully operational 501c3 nonprofit, was founded in 2008 as a ministry of the Lyons Community Church. Since its inception, LEAF has provided basic needs and emergency assistance to Lyons-area residents, stretching into unincorporated Boulder County. In partnership with Community Food Share, LEAF also operates a Food Pantry, which serves an average of 20-40 families per week. The need for services from LEAF and the Food Pantry has continued to grow over the years, ballooning since the September 2013 flood.

“LEAF has expanded and changed since the flood. Though we’ve seen an increase in activity post-flood, we anticipate a long term need for a professional human services organization in Lyons,” said Flemming. “It is so important because for the first time our residents are gaining access to resources that they were unaware of. With LEAF, no request goes unheard.”

The Town of Lyons hosts a population of 2,145 and serves as the hometown for residents residing in the surrounding mountains, in total serving a population around 3,500. 16% of Lyons residents report an income below the federal poverty level. An estimated 15-20% of all students at Lyons Public schools qualify for free and reduced lunch. A student qualifies for free and reduced lunch if their family’s income is less than 185% of the federal poverty level, or an annual income of $43,567 or less for a family of four.

As a result of the ongoing and increased need in the Lyons community, LEAF has joined forces with the Colorado Nonprofit Development Center. The Lyons Human Services and Aging Commission, Foothills United Way, and county health and human services professionals support LEAF in becoming the primary source of individual assistance in the town of Lyons.

The flood recovery efforts of Flemming and the Lyons Community Church have not gone unnoticed. They recently were awarded the “community service award” from the Group Publishing company in the amount of $25,000. Flemming believes this is a great honor because the recognition they received from a corporation outside of Lyons might drive more awareness to Colorado’s continued flood recovery efforts. She also believes they would not have received this award if it weren’t for the tight Lyons community collaborating in a great time of need.

The Lyons area was essentially the epicenter of the disastrous flood. The community has come together and achieved many successes in the flood recovery process. But there still is a long way to go. Flemming believes her and the Lyons’ community is a story of “resurrection.” As is the case with Jesus, with death comes resurrection - change, power, love, hope and a new beginning. The town of Lyons is resurrecting itself one day at a time. And, as Flemming, her colleagues and the Lyons Community Church have shown, one church CAN make a difference on the long and hard path to disaster recovery.

Below: Children and leaders of Project:KIDS, a monthly volunteer program, pose for a group photo. Courtesy Sara Goodwin 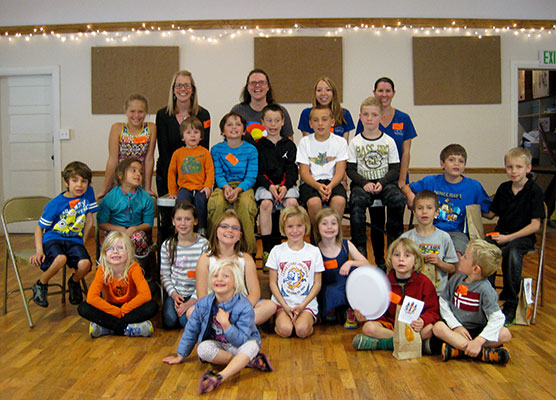