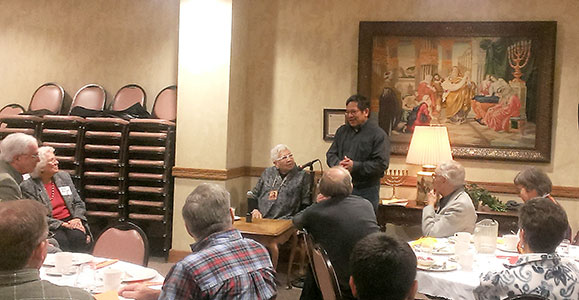 Dr. Henrietta Mann, founding President of the Cheyenne Arapaho Tribal College and Sand Creek descendant, spoke at Trinity United Methodist Church in Denver on Dec. 3 as part of the events commemorating the 150th anniversary of the Sand Creek Massacre. Mann was joined by her daughter-in-law Jennifer Whiteman and Chief Phillip Whiteman, Jr., of the Northern Cheyenne Tribe, who began the evening with a blessing in his native language.

“I questioned my decision to come here, but it is a different time and place,” said Mann referring to Trinity UMC, the location of Colonel John Chivington’s funeral in 1894.

Mann described life in the Colorado territory and the growing tensions between Native Americans and those migrating west. The brutality of that tragic day was horrific. Reparations were promised, but never came. No one was ever punished. The passing of time has allowed for reflection and healing.

“I wish that colonel shared my view of the people I love and had not led his troops of 700 men against the village of my people. We can’t go back and change history, but I continue my peaceful revolution and share my view of the world—a beautiful view of beautiful people.”