Countdown to Zero: Just Save One 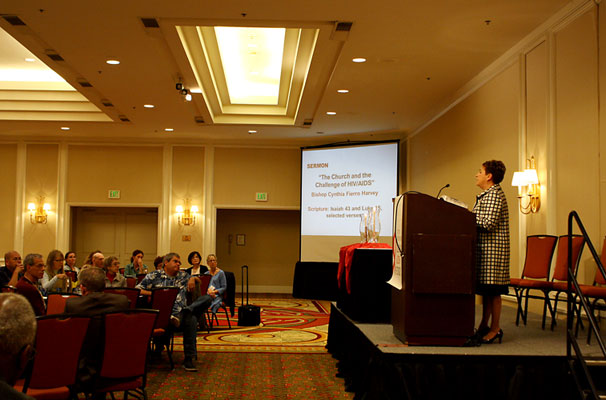 "Today is the day; there will never be another today," said Bishop Cynthia Fierro Harvey on the work of eradicating the HIV/AIDS epidemic during the opening of Countdown to Zero: Just Save One conference Sept. 11 at the Renaissance Hotel in Denver.

The conference, sponsored by the United Methodist Global AIDS Fund, runs through Sept. 13 and aims to provide participants with the knowledge, resources and inspiration to take action in eliminating the AIDS virus. The UNAIDS 2013 Global Facts Sheet states that about 35 million people worldwide currently live with HIV. And since the start of the epidemic, around 75 million have been infected with HIV.

During Bishop Harvey's address, she said "Often HIV/AIDS is referred to as an 'issue' -- but it's about people. ... People made in the image of God. What are we -- you and I -- willing to risk to save just one?"

The need to care for people affected by HIV/AIDS was tantamount for other conference leaders, with Bishops Elaine Stanovsky, Warner Brown Jr., Ann Sherer-Simpson and Albert "Fritz" Mutti offering their calls to action during opening worship.

Without our engagement, UNAIDS and the world will never get to zero infections." - Rev. Don Messer, Executive Director, Center for the Church and Global Aids

Following worship, conference attendees were split into track sessions on different topics: Latinas por la vida (Latina for Life), Native American Young People & Human Sexuality, Training the Trainer and Working Towards an AIDS-Free World. Rev. Don Messer led the discussion of Working Towards an AIDS-Free World stating the need of the church to embrace the science behind HIV/AIDS treatment and prevention.

Messer said part of the challenge is that religious groups and their teachings fuel stigma and discrimination, and the church has difficulty in addressing human sexuality. "Without our engagement, UNAIDS and the world will never get to zero infections," he said.

Rachel Steinberg, of UNICEF, also spoke during the session about her organization's efforts to prevent and treat the transmission of HIV from mother to child. She said that some 700 children globally are infected with HIV every day. However, UNICEF is working to improve services.

"Faith leaders play a particularly powerful role," Steinberg said. "Your core values are to save and protect children."

Larry Leutwyler, chaplain for the Bering Support Network and Omega House Hospice at Bering-Memorial Church in Houston, Texas, said he was attending the conference in order to help his ministry, which is a support group of about 30 to 40 people. Leutwyler said the support group, which began three years ago, had started with 150, but has since dwindled in numbers. He attributes it to continuing stigma surrounding people infected with HIV/AIDS. "Those who are newly diagnosed are afraid," he said.

The opening of the conference was capped off with a dinner and keynote address by Dr. Benjamin Young, who is the chief medical officer of the International Association of Providers of AIDS Care. He said 5,700 people today will acquire HIV, with 4,100 dying from it. He stressed the importance of treatment as prevention. "Access to universal treatment is a human right," Young said.

He pointed to statistics and studies that showed reductions in infections when treatment is successfully administered. However, he added that helping people with HIV/AIDS can't work unless there are non-judgmental settings and continued efforts to emphasize the immediate testing and treatment of HIV/AIDS.

"It's the failure of our imagination to demand that this stops, that the epidemic end," Young said. "I can't imagine a world that wants to live like that."