Alleluia! Christ is risen! He is risen, indeed!

Are you ready to leave the crucifixion behind and embrace resurrection’s power? We live in a world that invites crucifixion and tombs of death more than it welcomes resurrection and new life. The forces of death are all around us.

When death’s power has gripped our life, when the violence and injustice of the world seems to have the upper hand, sometimes burying ourselves in tombs of indifference and despair appears as the only real option. We numb ourselves through drugs or alcohol or sex or food. We deaden our hearts so that we cannot have them be broken by a world that always seems to disappoint us or let us down. We roll the stone in front of our soul in an attempt to protect ourselves, yet in the end we only entomb ourselves.

On that first Easter morning, the women went to the tomb to anoint Jesus’ body. They wondered 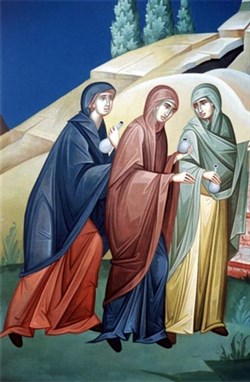 how they would roll away the stone but when they got there, the stone was already rolled away. Startled, they entered the tomb and a young man was sitting there who told them not to be alarmed. He knew they were looking for Jesus who they saw die by crucifixion and that finding an empty tomb instead of his body would be more than just a little disturbing. But the young man told them, “It’s okay. Jesus has been raised and isn’t here. Go and tell the others that he will meet you in Galilee just like he told you he would do.”

Nothing. According to the Gospel of Mark, they said absolutely nothing, because they were afraid.

I can understand their fear. How can you trust something that defies reality as we know it. Death, we get that. We grow accustom to the various ways it lures us to our tombs, how it seduces us to a death-like sleep. But resurrection? But new life? But a force greater than death? That is a frightening thought. Those women, they couldn’t leave the memory of the crucifixion and grasp the reality of the resurrection. The status quo of the tomb was familiar and comforting and it was frightening to consider that perhaps  the claim of Jesus’ raising to new life could be true.

Thank goodness that the story doesn’t end with crucifixion. Each day, we are invited to live into resurrection. The Jesus story is our story. The story of new life and liberation is not just some made up myth about something long ago and far away. Resurrection happens here and happens now.

Martin Luther King Jr. once said that the arc of the moral universe is long but it bends towards justice.  Chris Piatt adapted that to say that God’s arc for the whole of humanity is long, chaotic and sometimes even violent. But it bends toward hope. It bends towards life and love. It bends to harmony and beloved community. It leads, always and forever to resurrection.

May we all in the Mountain Sky Area experience the power of resurrection in our lives, our churches, and our communities, this day and every day!