Violence in Charlottesville reminds us we are called to "action through prayer... and denouncing acts borne out of hatred.

Bishop Karen Oliveto shares a weekly message to the Mountain Sky Area on Facebook every Saturday night. In response to the events in Charlottesville on Aug. 12, she posted this message:
Every Saturday night I spend time praying for the clergy and laity of the Mountain Sky Area as we prepare for Sunday. Tonight, so much hangs heavy on my heart following the violence in Charlottesville and the escalation of tensions between the US and N. Korea. Preachers, you cannot avoid speaking about this. People are hungry for Good News. What will you say? How will you address what happened this week? People are asking, "Is there any word from God?" Laity, remember your baptismal vows. You made a commitment, as a follower of Jesus, to resist evil, injustice, and oppression in whatever forms they present themselves. The sin of racism and the evils of war and violence mock Jesus' invitation to Beloved Community. We can no longer remain silent. To do and say nothing makes us accomplices to atrocities. Our words and our actions must witness to Love's power.

In addition, Bishop Karen Oliveto wrote a blog post speaking out about the violence in Charlottesville: Thoughts On Power and Privilege Post-Charlottesville
"As a white woman, I have to confront my privilege, and the fact that my walk in the world is much easier because of my race than persons of color. Every day, I must confess my racism. Racism is so deeply embedded in our culture and entangles all of us in its web of inequity. I have to consciously reject it every day and the main way I do that is through the power of empathy, listening deeply to how those of color have a much different experience of the world than I do." 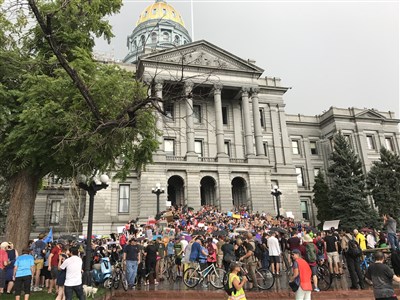 g. 13
Several local United Methodist pastors joined a crowd of nearly 1,000 people that marched from the Martin Luther King, Jr. monument in Denver's City Park to the Colorado State Capitol downtown in response to the violence in Charlottesville, Virginia. Read more about it on DenverPost.com

REGARDING CHARLOTTESVILLE
Rising tensions between nations, the threat of war, and now the violence and tragic deaths resulting from a white supremacist march in Charlottesville, Virginia, all draw our attention to the brokenness of our world.

Christians believe that every human is created in God’s image and that we are all united in the extravagant love expressed in Jesus Christ. Though we may look different than our brothers and sisters in humanity, or have different cultural dress and practices, we also seek to recognize that we share one Divine image, one spirit, and one soul. Read the rest of this post on RethinkChurch.org

At Sunday worship, pastors decry racism
By Heather Hahn
Aug. 14, 2017 | UMNS
United Methodist pastors across the U.S. scrambled to rewrite sermons and find other ways for their Sunday services to refute the racism on display in Charlottesville, Virginia.
Various United Methodist groups also issued statements calling for prayer and justice after avowed neo-Nazis, fascists and other white nationalists attacked protesters marching against them. The attacks turned deadly when a car rammed into protesters, killing 32-year-old Heather Heyer and injuring at least 19 others. Read more

Ways United Methodists can take a stand against racism
A UMC.org Feature by Joe Iovino*
August 15, 2017
Those in the United States live in a culture permeated with racial bias. We may not be able to avoid racism, but we don’t have to accept it. If God’s kingdom is to come, and God’s will is to be done on earth as it is in heaven, things need to change. We can be the agents of that transformation by changing our beliefs, changing our actions, and working to change the world. Read the rest of this feature

Topic: United Methodists seek racial justice
As followers of Christ, we embrace love and affirm all persons as equally valuable in the sight of God and therefore work toward societies in which each person’s value is recognized, maintained, and strengthened.

We recognize racism as a sin and seek to eliminate it.

On this page, you will find stories, resources and tools to learn more about the issue of racism and the ways you can advocate for the fair treatment of all people.