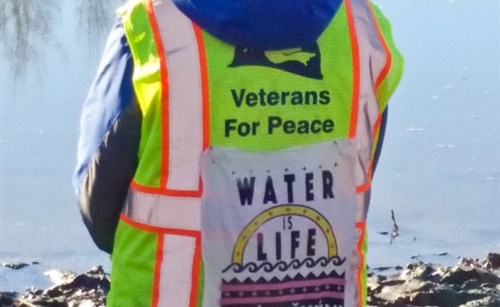 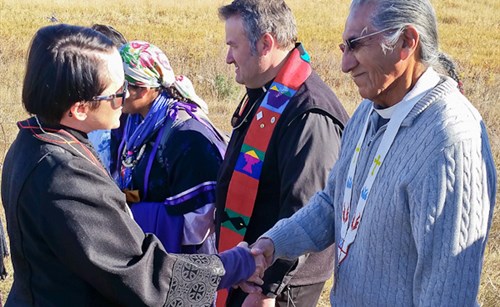 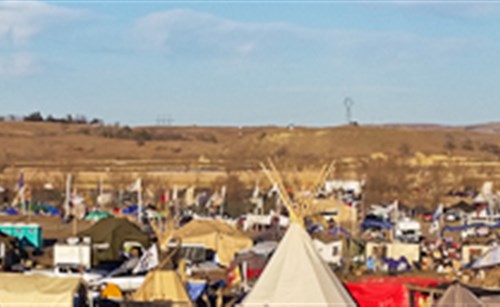 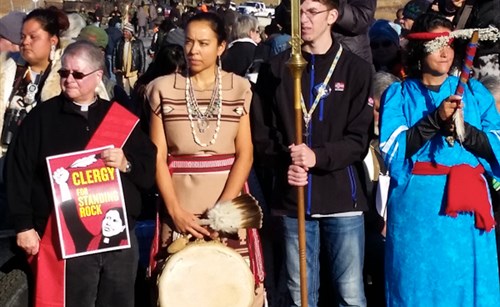 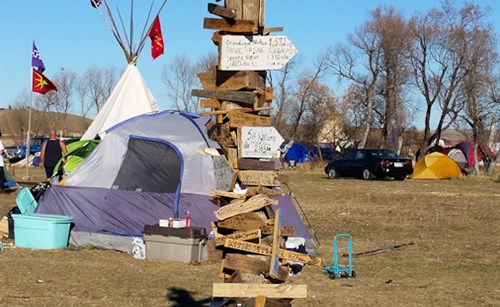 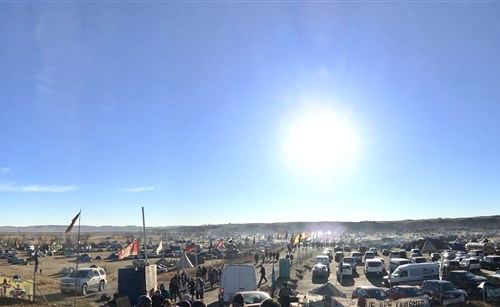 Several United Methodist clergy from the Rocky Mountain Conference traveled to the Standing Rock Sioux Camp in North Dakota to stand in solidarity with indigenous people protesting the Dakota Access Pipeline. The interfaith gathering was held Nov. 2 to 4. Below are two reflections from pastors Blaine Scott and Elizabeth Jackson. Story and photos submitted by the Rev. Blaine Scott
Steadfast Steeds Mustang Horse Sanctuary

“Water is Life!” they shouted in response to the leader’s call: “Mini Wichoni!” Hundreds stood at the Cannon ball river shore on a morning thick with warming fire smoke, rising river mist, and anticipation of another day lived in prayerful peaceful protection of the life-sustaining water. And though the water ceremony concluded, it was only one of many actions being poured into powerful prayers upon the people and the land.

Each day’s Direct Action Training taught new arrivals the principles of living together in harmony as guests of the tribal nations. Such as: Be prayerful and peaceful; non-violent action; we are protectors not protestors; and “isms” have no place here.

The Seven Councils Fire is the epicenter of prayers, drumming and singing, and announcements amplified throughout the camp by a sound system to help the 3,000-plus campers coordinate action; and the quake is being felt around the earth! International indigenous people and their “non-native relatives” are arriving daily to stand, to hug, and to hold sacred space in solidarity.

After reading the WJUMC Bishops’ letter aloud at the Seven Councils fire, several persons (native and non-native) approached me with affirmations and questions about U.M. practices. They are grateful for our unifying presence.

Historical and inter-generational trauma are difficult realities for older natives “elderlies”. An elderly man sat with me around his fire. He shared how hard it was to see the clergy collars and robes earlier that day at the front line. “My grandfather was pulled from his family by priests who forced him to stand in line and be baptized.”  He paused, chin quivering as he wiped away the tears streaming down his bronze cheeks. “They thought they were saving him, while it was really killing the family. And though it is good for you (the collective clergy) to be here in solidarity, it does not change what happened to my family.”

That conversation, like a drop of healing water flowing in the stream of forgiveness, repentance, and hope, is and needs to continue washing over our diverse races and creeds, so that all can drink deeply of the cleansing waters of love. Mini Wichoni.

Story and photo submitted by the Rev. Elizabeth Jackson
Founder of In the World

I’ve spent some time over the last few months reflecting on if I believe the church is following society or if the church is seeking opportunities to lead society. In one distinct manner, I think the people of the Church may be following society instead of paving a uniquely clear path that aligns with the Good News. We are allowing ourselves to become differential in our thinking and interpretation of life’s challenges, issues, ideas, and conflicts.

One area we see this play out in society and in our churches is regarding the movements of #BlackLivesMatter and #BlueLivesMatter / #AllLivesMatter. One cannot both name and want change of systematic racism within our judicial system and support the service of police officers. We see it play out in our very United Methodist Church, and beyond; one cannot be pro- inclusion and orthodox or evangelical.

In our attempts to make everything as distinct as the black text on the white pages of our bibles, we are missing the messages and nuances of the stories, lessons, and commandments within our scriptures and the world around us. We, as faith leaders and as Christians, are failing to step into spaces where right and wrong, left and right, #WWJD and what would Jesus not do lack distinction and clarity.

That understanding of our Church and Society today dramatically influences what I saw and experienced in my trip to North Dakota last week. Lines have been drawn and simultaneously the Spirit has come along and smudged them. Digital cameras take photos of teepees; clergy gather in full garb on one side of a bridge while armored vehicles and police in combat gear line the other side and the hilltops surrounding; elders of Indigenous Nations accept apologies and requests of peace by young clergy taking responsibility for a document created 524 years ago.

The water protectors and the police lining the sides of the Missouri River in North Dakota are not gathered for one reason. The Dakota Access Pipeline is not one singular issue that can be solved with enough prayer or enough expert advice or casting a lot. The singular bridge on ND Highway 1806 and the encampment just south of the bridge have become iconic of issues regarding ecology, consumerism, racial equality, respect of sacredness outside of one’s faith tradition, human rights, police accountability, and government relations with corporations. We cannot assume that there is one issue, and we cannot slip into our society’s habit of seeking a singular dualistic assessment of next steps that we see through internalized understandings of right and wrong.

Reconciliation begins in acceptance of difference, even honoring the difference, and then choosing that relationship, a spirit of compassion and sympathy, dignity, or recognition of the Diving in the Other is a more important and revered position from which to build a foundation for healing, growth, and invitation for something new (and possibly previously unimaginable).

The people of the Standing Rock Sioux Tribe and the 200 other indigenous tribes from around the world are seeking reconciliation. Each morning they begin the day with prayer and song. They pray and sing for the safety and honor of water and the river that provides drinking water for more than 10 million people downriver. They pray and sing for the safety and respect of nonviolence for their water protectors and all who come to be present alongside the water protectors. And, they pray and sing for the police guarding the Missouri River, guarding the working digging the pipeline, and guarding the sacred ground that holds the remains of the Sioux and Lakota ancestors. Around the sacred prayer fire that has burned since the beginning of the conflict, every morning prayer and song is lifted for the workers of the Dakota Access Pipeline.

This is not a conflict that can be boiled down to environmental concerns or anti-government/anti- establishment behavior or colonialists versus Native Americans. I wish it was. It is however an opportunity to recognize intersectionality of issues and concerns; intersectionality of positions, politics, and faith; and intersectionality where we as Christians can both renounce the behaviors of those who have come before us (Pope Alexander VI and all traditions and people who followed) and lead our congregations and communities to forge a path beyond black and white grounded in the Good News and reconciliation ahead of and differentiated from society and society’s modus operandi.