Five men and seven women from eight different churches across the five states of the Mountain Sky Conference came together as a United Methodist Volunteers in Mission team (Utah 96). We converged in San Juan, Puerto Rico in early November and departed to our homes a week later, having accomplished what we had come for.

The Team and Work
When we 'missionaries' signed up for the trip, we had no idea what we would be asked to do. All we knew was that we wanted to make life a little better for those who were still recovering from Hurricane Maria in September 2017. We soon discovered that our task would be to replace blue FEMA tarps with a metal roof that could withstand 180 MPH winds. To be honest, some of us wondered how we would do that and whether we were up to that type of physical work. It turned out that we were - God provided and used us for his purpose.

The Methodist Church of Puerto Rico had recently been one of five charitable organizations that FEMA had left in charge of continuing the recovery activities. Through the church’s social arm, ReHace, and with $5 million from FEMA and $20 million from United Methodist Committee on Relief (UMCOR), they had hired more foremen, translators, civil engineers and caseworkers, and had stockpiled tools and supplies. They also found additional churches to host mission teams. ReHace is now serving 25 communities on the mainland and on the island of Vieques.

Ours was the first team to work on houses in the San Juan area. We were also the first to stay the week in Iglesia Metodista de Los Angles. Prior to this, because of its proximity to the airport, the church had been the holding area for teams working on different parts of the island. The church provided beds and mattresses, meals in a common area, and two vans. 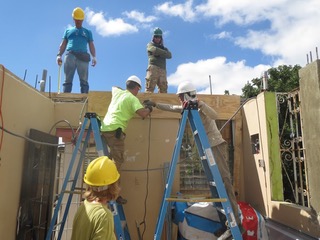 Because our team was so large, ReHace divided us into two teams and set us to work on two different houses with two completely different issues. One house was in Tao Baja and the other was in San Juan. Both were occupied by a family; both measured 20 by 30 feet; and both were made of concrete block. At the beginning of the week, civil engineers came to reassess the projects and talk the foremen and team through what needed to be done. The metal trusses, cross beams, and corrugated metal sheets were delivered and work began. That’s where the similarities of the two projects ended.

The home in Tao Baja was occupied by an older man who lived on the second floor under a blue tarp to keep dry, and his mother lived on the first floor. Because this tarp and the house walls were in good condition, the team was able to start building and installing the support structure for the roof under the tarp. By the end of the week, this team was able to install a couple of the metal sheets and roll back part of the tarp. The older man christened his team the A-Team.

In the San Juan home, a family of four adults shared the first floor. The tarp covering the second floor was in tatters and rain leaked onto the first. To ready this house for a roof, much demolition had to be done before rebuilding could start: removing the tattered tarp and the rotted beams that held it up; removing the aluminum windows to pour cement columns and headers; and leveling the walls with concrete so they would be strong enough to hold the new roof. More rain fell and through the first of our week, so we felt discouraged. We also imagined the family shared this discouragement when they saw the pile of rubble grow, but no rebuilding on the top floor. By the end of the week, we had strong cement columns in place and started fastening cement forms to the walls. We regained our hope, and as we left the family gave us hugs and kisses.

The Adventures
By no means was the trip all work and no play. We all arrived on a Saturday, attended a church service with our hosts on Sunday, followed by a visit to sight see in Old San Juan. Throughout the week, groups ventured out to areas around the church to shop and enjoy ice cream after work. Although we had the opportunity to take a half day on Friday, we all wanted to continue working on our roofs to get as much done before our departure the following day. As we gathered at the airport to fly home, we were tired but full of smiles. Everyone was pleased with how God used our various talents and skills for this work. 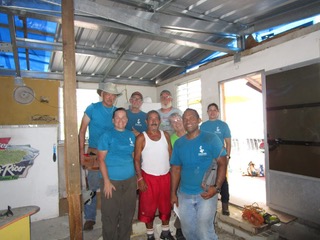 The Outcomes
We are pleased to report that on both projects, other UMVIM teams followed us to further the work we began on the homes. We count as a blessing to be a part of this connectional denomination. While we were there ReHace reported that teams were scheduled every week through March 2019 and they couldn’t accept any more teams or team members until April. What good news! With some 20,000 tarps to replace, it will take a long-term concerted effort. We would urge everyone to look for and join a team.