Father and son serve together at General Conference 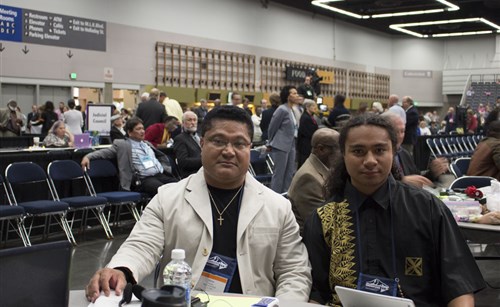 Rev. Sione Tukutau and son Harvey together on the plenary floor of General Conference on May 16. Photo by Charmaine Robledo, Mountain Sky Area 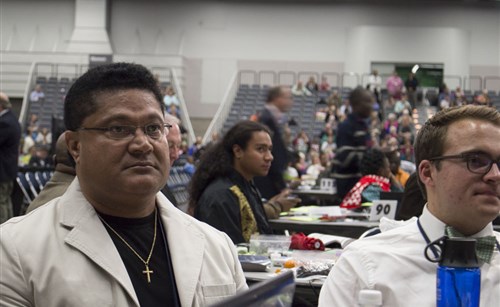 Rev. Sione Tukutau and son Harvey (in the background) together on the plenary floor of General Conference on May 16. Photo by Charmaine Robledo, Mountain Sky Area
Submitted by the Rev. Jessica Rooks
Clergy Delegate for Rocky Mountain Conference

There is something unique about the 2016 General Conference gathering; something that could easily be missed by the average observer on Twitter, or even the average delegate walking by on the floor. This unique thing, this something different, took place at the Rocky Mountain Conference delegation table today, May 16. This unique thing is all about who sat at the plenary tables for the RMC delegation during the afternoon session.

Seated at the table was a father-and-son combination that one does not often find at the General Conference assembly. The Reverend Sione Tukutau, clergy delegate, and his high-school son Harvey Tukutau, joined their voices as they cast their votes for this quadrennium's denominational leadership along with other business. It could be the first time a Pacific Islander father/son combo sat on the floor at General Conference. If it isn't a first, it is a rare occurrence.

Rev. Tukutau is currently the Superintendent for the Utah/Western Colorado District, anticipating a move to First United Methodist Church in Greeley, Colorado, as the senior pastor this July 1. Harvey is a member of Trinity UMC in Kearns, Utah, and a senior in high school. Harvey is the youngest voting delegate this year (not including reserve delegates). He was nominated to represent the Western Jurisdiction on the Commission for General Conference, but withdrew his name in support of another WJ delegate in a very gracious and supportive gesture. Harvey was asked to pray for the body as we adjourned for lunch today, allowing him a chance to speak in front of United Methodists from around the world.

Today was the first time father and son were seated as voting delegates together here in Portland. Harvey serves as third-elected lay person, and Sione serves as a reserve clergy delegate. They won't be at the tables together often this week, and so it was a unique opportunity to catch a glimpse of one generation passing along a love of our denomination to the next generation.

The Rocky Mountain Conference celebrates the work of both Sione and Harvey. They speak to different generations within our church, they offer unique voices and perspectives, and yet they share a love that unites them. If all of the work at General Conference could reflect this dynamic, imagine what the UMC could accomplish.