First UMC in Gillette takes a stand against hate 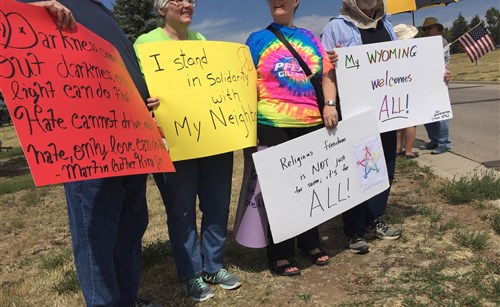 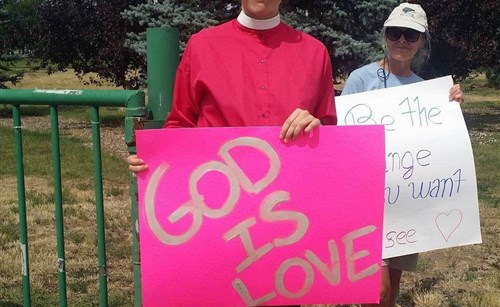 Members of First United Methodist Church in Gillette, Wyoming, joined with other individuals from around the state to protest the burning of a Quran that took place in Gillette on Aug. 27. The group "Wyoming Against Islam" held an anti-Islam rally at a park in Gillette and burned a Quran as part of their demonstration. About 10 people showed up to support the burning of the Quran. However, over 35 people gathered in a counter-protest to stand against hate and support the Muslim community in Gillette.

Counter-protesters lined the entrance to the park with signs that read, "Wyoming against HATE," "I stand in solidarity with my Neighbors," and "Be a good Samaritan." A large American flag was raised above the counter-protesters as Mohammad Khan, a young Muslim man living in Gillette, came to speak to the group.

“The word Islam means peace,” Khan said, “and that's what makes America great – you've got all these religions, all these minorities, and they’re all living here in peace. We’re going to continue to live in peace here.”

For members of First UMC, the counter-protest was a tangible way to live out Jesus’ commandment to love your neighbors.

“By standing against hate, we are showing the community that Jesus wants us to be people of welcome and hospitality,” said one member. “It’s pretty clear that Jesus would love his Muslim neighbors and we should, too.”

Read more about the counter-protest on LaramieLive.com