On March 6, Preservation Utah announced that First United Methodist Church (FUMC) of Salt Lake City is the recipient of this year's 2020 Utah Preservation Award for the Restoration & Renovation of our Sanctuary and Historic Pipe Organ.

Preservation Utah’s annual awards program celebrates the people who make preservation happen: dedicated homeowners, insightful architects, creative developers, and visionary leaders. The Mission of Preservation Utah is to keep the past alive, not only for preservation but to inspire and provoke a more creative present and sustainable future.

Each award recipient represents a model that others can look to for meeting the challenges of preservation. As a group, the recipients represent the many and varied ways preservation is accomplished in our communities. Through this awards program, Preservation Utah congratulates our award recipients and thanks them for their contribution to preserving Utah's architectural heritage. The Utah Preservation Awards Dinner will be held in the Fall of 2020 where members of our congregation, the organ builders, and others will be recognized and honored with this prestigious award.

First UMC is so pleased to accept the Utah Preservation Award.  It is a recognition of the important role the church has played in the quality of life in the downtown area and the uniqueness of its architecture.”

Our historic building was dedicated on May 27, 1906, and represents a Victorian Eclectic architectural style designed by Frederick Albert Hale (1855-1934), a prominent Utah architect.  The pipe organ had its inaugural recital on Dec. 7, 1906. It was constructed by the George Kilgen and Sons Organ Company (1873-1939) of St. Louis, Missouri.  This organ, now known as The Wesleyan Heritage Organ, is one of the oldest pipe organs in Utah.

When Scott R. Mills, CAGO was hired as organist in 2008, he determined that the pipe organ in the Sanctuary was in need of significant repairs. Numerous parts of the organ were failing, disconnected, unused, missing and badly out of tune.  An electronic organ had been added in 1989 and the electrical components of the console were then also beginning to fail.

FUMC launched a fund-raising campaign in November of 2009. The Sanctuary project included restoring the space back to its original openness using our earliest photo from 1915.  The pipe organ project included re-establishing the organ’s unique 1900’s tonal style, restoring the organ case back to its original design, obtaining a vintage console and augmenting the character of the organ with other vintage components.

Major renovations to the Sanctuary and the organ took place in 1960 and 1989 as seen in these photos. 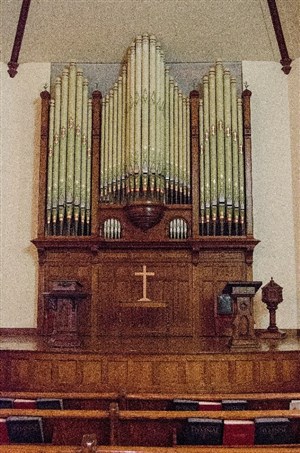 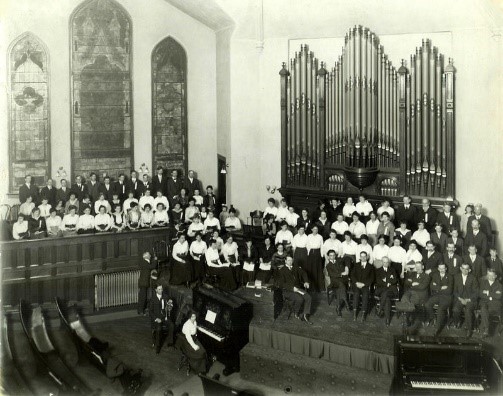 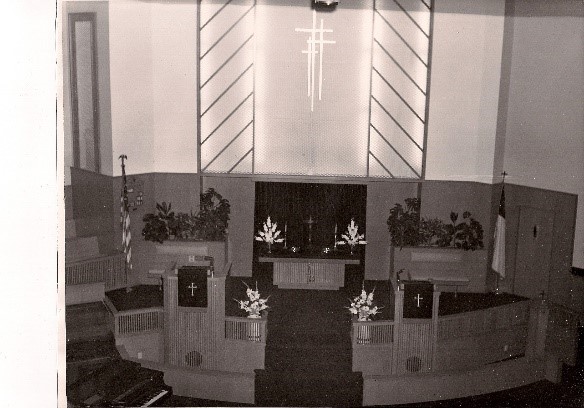 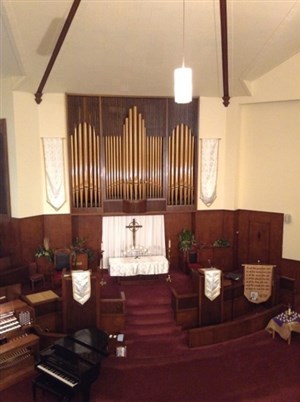 By early 2014, gratefully, we had raised sufficient funds through private donations, grants, crowd-funding, and community resources to hire Bigelow & Co. Organ Builders of American Fork, Utah. In May 2014, we moved the entire organ from its chamber in the Sanctuary and transported it to their workshop.  We hired Tony Devroude of Artisan Organ to paint and re-stencil the front 35 façade pipes that would be seen in the Sanctuary.

By the fall of 2014, we were ready for the architectural assistance from the expertise of Allen Roberts with CRSA with the remodel of the Sanctuary space. In early 2015, we hired Paulsen Construction to do the work of refinishing the wood floors.  After removing the carpet, the stage was completely redone as the subflooring was in such poor condition, however, the flooring in front of the stage is original.


With the Sanctuary project completed in September of 2015, the organ was moved “home” in October 2015.  It would take about six months to get most of the organ back up and playing.  We had some of the organ for our Christmas Eve services, more at the time of the dedication on January 10, 2016, and most of it completed by the time of the Donors Appreciation Concert by Dr. Richard Elliott, Tabernacle Organist on April 8.  Although the organ was about 90% functional by the end of 2016, there were additional specialty pipes and component reworks.  The project was completed in March of 2019. A Curatorship Fund is set up to care for the ongoing needs of the organ for years to come.

Since January 2016, we have hosted over 200 musical events and concerts in our Sanctuary.  The intimate space is ideal for performance and we have hosted ensembles, orchestras, choirs, recordings, operas and student recitals for violin, cello, piano, flute and other groups. More than 5,000 people attended events alone in 2018.  We often have groups bring canned food in exchange for use of the building.  More than 3400lbs of food has been donated to Crossroads Urban Center food bank.

The organ is used every Sunday for our worship services.  A special organ recital was performed by our organist to celebrate the 110th anniversary of the organ in December 2016.  We host organ recitals and events with the American Guild of Organists including the West Regional Convention that was held in June 2017. Numerous organ concerts have been held.

Preserving this instrument with the restoration of the Sanctuary and in celebrating our treasured 150-year history as a congregation in Utah, this project is a significant connection with our past and provides a sustaining commitment to who we are as a people in our worship to God.