The First United Methodist Church in Boulder turns 160 years old this year! First United Methodist Church of Boulder will celebrate our 160th anniversary on Sunday, Nov. 24, with a special worship service at 10:30 a.m. in our sanctuary. We are inviting former clergy to return and celebrate with us, and we'll welcome former FUMC pastor, the Rev. Charles Schuster, back to the pulpit. Rev. Schuster served as FUMC's pastor from 1982-1989. In our 9:00 a.m. Forum program before the service, Rev. Schuster and FUMC's current pastor, Matthias Krier, will be in conversation. After worship, we'll enjoy a Homecoming Harvest Luncheon with turkey, gravy, and anniversary cake (there will also be a vegetarian option); parishioners are invited to bring a favorite Thanksgiving dish to share. All are welcome to attend! Please RSVP to the church office if you are planning to come to the Harvest Luncheon.  Please RSVP to the church office email: office@fumcboulder.org.

The community that became First United Methodist Church of Boulder (FUMC) was founded in 1859, when the Rev. Jacob Adriance, a Methodist circuit rider, first preached to a small group of followers in the Boulder City Town Company, which had been founded the same year. Adriance became the first circuit-riding preacher in Boulder. In 1871, the City of Boulder was incorporated, and the membership of The Boulder Methodist Church paid $200 for two lots at Fourteenth and Spruce (where our current church still stands), and on November 10, 1872, the church built on that site was dedicated.

Only 20 years later, a new church was built on the same site at a cost of $22,500.00. Made of native stone from nearby Green Mountain Quarry, the church boasted a novel feature: central heating! A portion of this church forms the western-most part of our current structure (the chapel, bell tower, and choir room area). The beautiful stained glass windows in the chapel and choir room are treasured remembrances of the 1892 church. 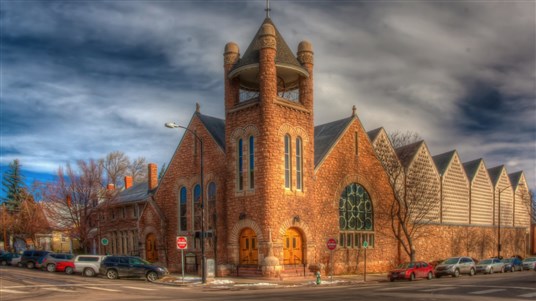 An addition was made to the 1892 church in 1914 (currently the parlor area), and in 1953 the “educational wing” was completed. In the church’s Centennial Year of 1959, construction began on a new sanctuary, which was completed and consecrated the following year. At that time, the 1888 Roosevelt organ that we continue to treasure today traveled from its previous home in Denver to be installed in FUMC's new sanctuary, The organ underwent an 18-month restoration in 2013-14, funded by a generous gift from longtime FUMC members Suzanne and David Hoover, in memory of Suzanne's mother, Virginia Anderson.

The church's 1960 sanctuary has undergone several renovations, with the most recent being in 2009, the year of FUMC’s 150th anniversary. Today our sanctuary is a sought-after performance venue used by many groups including the Seicento Baroque Ensemble (FUMC's Ensemble-in-Residence), Resonance Women's Chorus, the Boulder Chorale, the Boulder Chamber Orchestra, the Denver Gay Men's Chorus, Pro Musica Colorado, Ars Nova Singers, and the Boulder International Film Festival.

In 1997, First United Methodist Church (FUMC) took the controversial step of exploring whether to become a Reconciling Congregation, welcoming of LGBTQ people and their loved ones. The congregation voted in the affirmative, and since that time, FUMC has been a proud member of the Reconciling Ministries Network, which was formed in 1984 to establish a landscape of LGBTQ-affirming churches that would oppose discrimination in The United Methodist Church. As of this writing, FUMC is one of more than 1,000 Reconciling congregations, communities, and campus ministries world-wide. We celebrate the anniversary of becoming a Reconciling Congregation on a special Sunday every March. On March 15, 2020, we'll celebrate Reconciling Sunday with guest speaker J.J. Warren, a seminary student at Boston University School of Theology, whose impassioned plea for the inclusion of LGBTQ persons at this year's United Methodist Annual Conference electrified the room and went viral outside of General Conference.

A unique feature of our church is our beautiful indoor labyrinth, which is open to the community for walking and contemplation, free of charge Monday to Thursday, 9 a.m. to 3 p.m.; Wednesday evenings from 6:30 p.m. to 8 p.m; and Sundays from 9 a.m.to 12 p.m. The labyrinth was constructed and hand-painted in 2001, and was dedicated on December 8 of that year. It is modeled after the Chartres Labyrinth, a classical eleven-century labyrinth that was laid into the stonework on the floor of the great cathedral at Chartres, France. FUMC's labyrinth offers a space for both individual spiritual exploration and group services and gatherings. We celebrate the Spring and Fall equinoxes on the labyrinth each year, as well as the Summer and Winter Solstices; the Winter Solstice celebration is coming up on December 18 from 6:30 p.m. to 8:30 PM.

Today, First United Methodist Church of Boulder stands as a proud center of the Boulder community. We have put our square block into mission, supporting the work of the non-profit partner agencies Out Boulder County, the Boulder County AIDS Project, and Attention Homes with subsidized rental rates, free meeting space in the church building, and sponsorship/support of programs. In 2017, the church entered into a 60-year land lease agreement with Attention Homes on the northeast corner of our property so that they could build the Attention Homes Apartments there. This 40-unit apartment complex for formerly homeless, transition-age youth, ages 18-24, includes on-site services such as job training, life-skills development, employment opportunities, and education support to build toward long-term self-sufficiency. Construction on the apartments is nearing completion, and the first residents should move in before the end of the year.

As FUMC marks 160 years in the Boulder community, we look forward to the next 160 with excitement! Our 160th anniversary is an opportunity to celebrate all that we have achieved in the past 160 years, and plan for the continuation of our work to bring justice and caring to all people in the next 160 years.