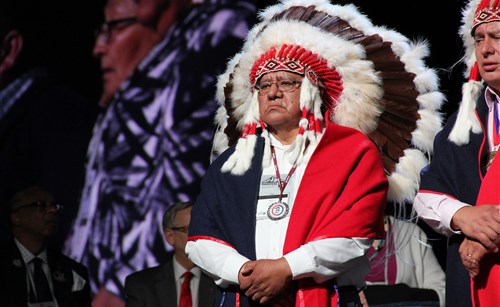 Allen Sutton, Southern Arapaho chief, stands with other descendants of the Sand Creek Massacre during a report at General Conference on May 18. Photo by Teri Tobey, Pacific Northwest Conference 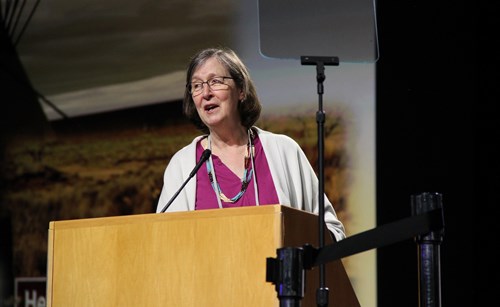 Bishop Elaine Stanovsky, of the Mountain Sky Area, helps present a report on the Sand Creek Massacre on May 18 at General Conference. Photo by Teri Tobey, Pacific Northwest Conference 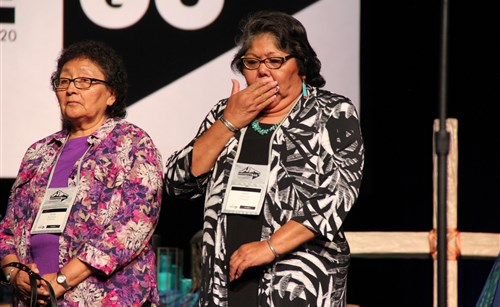 Karen Little Coyote, of the Southern Cheyenne, stands with other descendants of the Sand Creek Massacre during a report to General Conference on May 18. Photo by Teri Tobey, Pacific Northwest Conference
Story by Charmaine Robledo
Director of Communications, Mountain Sky Area of The United Methodist Church

Forty years after the Sand Creek Massacre was first reported at the 1976 General Conference in Portland, Oregon, delegates once again recalled and lamented the atrocities of Nov. 29, 1864.

On May 18, Mountain Sky Area Bishop Elaine Stanovsky was joined by Cheyenne and Arapaho descendants of the massacre survivors during a report on Sand Creek. This included Otto Braided Hair, of the Northern Cheyenne, who co-chaired the project.

Dr. Gary L. Roberts, whose book Massacre at Sand Creek exposed the truth of that event and the involvement of the Methodist Church, spoke about his research and how Governor John Evans’ policies “paved the road to Sand Creek.”

On Nov. 29, 1864, more than 600 U.S. Army volunteer soldiers – led by Methodist ordained minister John Chivington – attacked a peaceful camp of Cheyenne and Arapaho tribes near Sand Creek. Nearly 200 women, children and elderly in the camp were killed and many more left wounded. Soldiers carried and paraded the body parts of the dead through the streets of Denver.

In 1999, the Spiritual Healing Run & Walk was established to reclaim the trail the soldiers used to parade the mutilated bodies of the Cheyenne and Arapaho tribes. Members of the Rocky Mountain and Yellowstone annual conferences joined in the 150th anniversary of the Sand Creek Massacre in 2014. Prior to the opening of the 16th Spiritual Healing Run & Walk at the Sand Creek Massacre National Historical Site east of Eads, Colorado, the Rocky Mountain Conference held a Prayerful Preparation gathering with a time of reflection and education. The conferences have been involved with the Spiritual Healing Run for more than 10 years.

After the report, Bishops presented descendants with gifts. Later that evening, the Council of Bishops hosted a dinner for the descendants and invited them to further reflect about the day.

Gail Ridgely, of the Northern Arapaho and member of Riverton UMC in Riverton, Wyoming, said he is “learning everyday about my history.”

“It’s not dead history to our people,” he continued. “It’s very much alive.” He thanked Bishop Stanovsky for her collaboration, open-mindedness, and strength.

“We still have a great deal of work ahead,” said Dr. Henrietta Mann, Sand Creek descendant and a professor of Native American studies and former college administrator. She added that today’s presentation was “a stopping point, but tomorrow, we begin our work again.”

The Mountain Sky Area is continuing its work and relationship with the Northern Cheyenne with a Community Fire Protection Partnership. Read the United Methodist News stories: