Read the previous story on the Prayerful Preparation gathering the Rocky Mountain Conference hosted Nov. 29 prior to the opening of the Sand Creek Massacre Spiritual Healing Run. 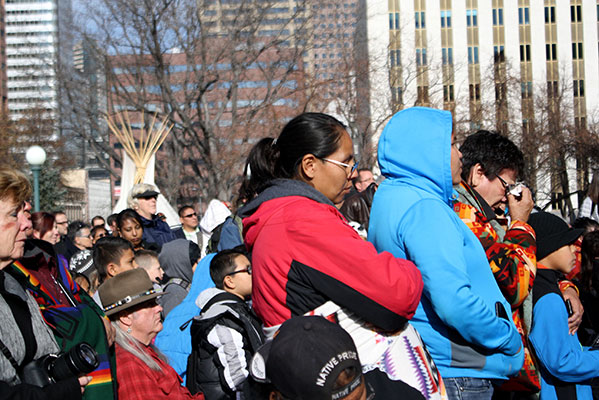 Above: Members of the crowd cry as they listen to Governor John Hickenlooper retell the horrific acts of the Sand Creek Massacre during the closing ceremonies for the Annual Spiritual Healing Run & Walk on Dec. 3 at the Colorado State Capitol in Denver. Photo by Charmaine Robledo, Mountain Sky Area

The closing ceremonies included a speech by Colorado Governor John Hickenlooper, who formally apologized on behalf of the state for the Sand Creek Massacre, to the sound of applause from the crowd.

Hickenlooper said two of the hardest words to say is "I'm sorry," but along with the past Colorado governors who agreed with him, said the state needed to apologize.

"I assure you, we will not run from its history," Hickenlooper said about Sand Creek. "We will make sure history is told."

He then proclaimed that Nov. 29 to Dec. 3, 2014 will be recognized as the "Sand Creek Massacre and Healing Run Remembrance Days." Following his speech, Sand Creek descendant Al Addison, Sr., of the Northern Arapaho Tribe, presented Hickenlooper with two paintings by artist Eugene Ridgely.

We will make sure history is told." - Colorado Governor John Hickenlooper

Byron Strom, a descendant of Captain Silas Soule, read a letter by him testifying to the horrific acts of the Sand Creek Massacre on Nov. 29, 1864.

Soule commanded Company D of the 1st Colorado Calvary during the Civil War and refused to join the Sand Creek Massacre. He testified against John Chivington, who led the event, and Soule was later assassinated.

Earlier that morning, runners and members of the Cheyenne and Arapaho tribes honored Soule at Riverside Cemetery in north Denver. To the beat of drums, they sang songs to remember Soule's act of defiance. Healing Run participants then passed by Soule's grave marker at Riverside Cemetery on their way to the Colorado State Capitol in downtown Denver.

The closing ceremonies also included presentations by the National Park Service, the Colorado Supreme Court and the Denver mayor's office. A special presentation was given to the late Steve Chestnut and his family for his work as an attorney and representative for the Northern and Southern Cheyenne tribes. Chestnut was given a Cheyenne name that translates to "Rises From the Clouds."

During the Healing Run & Walk closing ceremonies, students from East High School marched by the State Capitol protesting last week's grand jury decision in Ferguson, Mo. Otto Braided Hair, Sand Creek descendant of the Northern Cheyenne Tribe in Montana and co-organizer of the Spiritual Healing Run, welcomed the students and spoke in solidarity of their cause.

The closing ceremonies were followed by a Feast at the History Colorado museum and a powwow at the Sheraton Hotel. 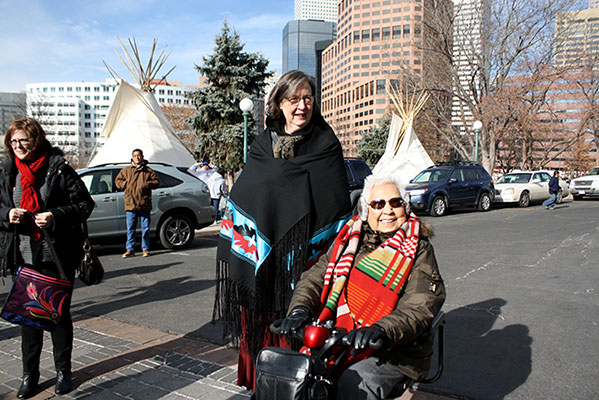