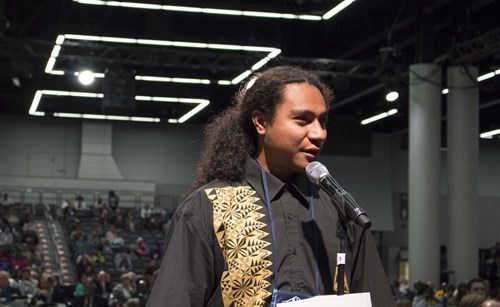 Harvey Tukutau, 18, pulls his name from the slate of nominees for the Commission on General Conference on May 16. Photo by Charmaine Robledo, Mountain Sky Area 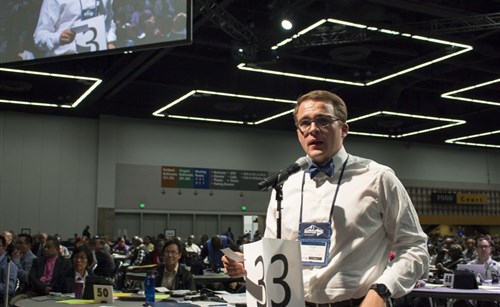 Doug Palmer, 20, nominates Harvey Tukutau for the Commission on General Conference on May 12. Photo by Charmaine Robledo, Mountain Sky Area 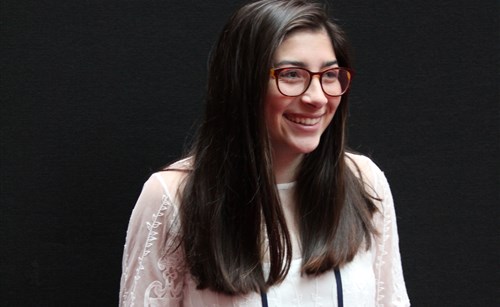 The lack of youth delegates among the 864 delegates to General Conference 2016 means that for the second time in a row, the commission that runs the denomination’s top legislative assembly won’t have a youth delegate.

Only one voting delegate and one reserve delegate are 18. That makes both too old to serve on the Commission on General Conference as youth representatives, according to the Book of Discipline.

“In the eyes of General Conference, there are no youth delegates,” said Doug Palmer, 20, first lay delegate for Rocky Mountain Conference, who nominated 18-year-old Harvey Tukutau to serve on the commission. “We need to put a young voice here and we’ve failed to do that.”

Paragraph ¶710, Section 3 of the Book of Discipline says: “All youth representatives elected to general agencies shall be at the time of organizational board meetings twelve to sixteen years of age.” Tukutau is the third lay delegate for Rocky Mountain Conference and a high school senior. Emily Bennett, a reserve delegate for the California-Nevada Conference, is also 18 and in high school.

Palmer nominated Tukutau to serve on the Commission on General Conference, only to learn the 18-year-old wasn’t eligible.

Palmer had first clarified with General Conference Secretary Gere Reist the age eligibility for youth nominations and was told the age limit was up to 18 before putting forth Tukutau’s name May 12. Reist later corrected himself about the age eligibility on the plenary floor, citing the Book of Discipline.

Because of that, the youth slot for the Commission on General Conference will not be filled. This also happened in the last quadrennium in which there were no youth delegates available for election. Josh Houser, of the Oregon-Idaho Conference, was put on the commission as a non-voting member. Now he is a young adult reserve delegate.

“I think it’s really sad,” said Bennett. “Throughout our history we’ve been dropping numbers in our youth. I’m here and Harvey’s here. We need to recognize we need them.” For her, if she was to be put on the commission, she “would do it if I had both a voice and vote.”

Carl Gladstone, of Discipleship Ministries, agrees. “We need to realize the unique voice that a youth can offer, which is distinct from a young adult voice.”

However, getting youth to General Conference can be challenging, especially when cost, logistics, and Safe Sanctuaries are involved. There is also a question on how much commitment youth can offer. The Book of Discipline also states a “voting member of a general agency shall be eligible for membership on that agency for no more than two consecutive four-year terms.” For youth 12- to 16-years-old, that means the commitment takes them through high school and college.

During the election for the Commission on General Conference on May 16, Tukutau pulled his name from the slate of nominees. The Western Jurisdiction then only had one other nominee, who was Marie Kuch-Stanovsky, a young adult. Bishop Elaine Stanovsky, who presided over the session, said it was the responsibility of each area and annual conference, not the General Conference body, to be intentional and more inclusive in their delegations.

Indeed, empowerment of youth to be involved with the church is dependent on local churches to help them learn and grow. Palmer said it was because of great mentors and youth workers who helped him get to where he is today.

Nonetheless, “this whole thing highlights the status of young people in the church,” Palmer said. “We give mixed signals. We don’t know how to relate with youth. I’ve had to look older and act older than I am to be in this space.”

According to the Daily Christian Advocate, petition 60172 about Young People’s Representation was not supported, with a vote of 37-31.