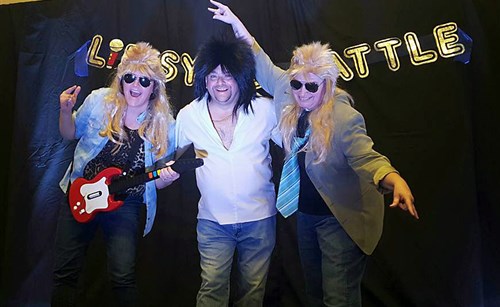 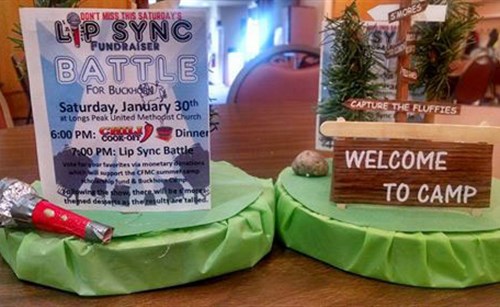 January 30 was a transformative night in the life of Longs Peak United Methodist Church in Longmont, Colorado. That was the night of the inaugural "Lip Sync Battle for Buckhorn", a new church event to raise funds for children and teens to attend Buckhorn United Methodist Camp.

The church’s fellowship hall received a makeover into a wondrous campground motif, complete with pine and birch trees, tents, and furry critters. It was here that a chili cook-off featuring Longs Peak UMC’s finest cooks fed approximately 85 people with varieties of chili that would satisfy any palate. Longs Peak UMC was delighted that special Conference staff guests Ryan Culby, Director of Buckhorn Camp, and Laurie Day, Assistant Director of Mission and Ministry, attended as well.

Next and with anticipation, the crowd moved their way into the Sanctuary to watch the Battle for Buckhorn begin. The show was a smash-hit based on its technical aspects alone – the lights, audio, video, set, and props were unrivaled by any Front Range cabaret. Weeks of rehearsing, designing, and choreography came to life as the 25 performers took their turns on the stage. Through “dance” and “song” and good clean fun – each gave glory to God in uniquely entertaining ways.

At the end, the audience demonstrated enthusiastic approval by their generous donations into buckets labeled for each performance. Approximately $1,547 was raised to help send kids to Buckhorn Camp – kids who might not otherwise have been able to attend. And, to “pay it forward”, the Children and Family Ministry council pledged $370 (one elementary campership) directly to Buckhorn.

What a fabulous night! The experience was truly inter-generational, enjoyed by young and old alike.