Riverton, Wyoming has never been an easy place to live for tribal nations. On one of the largest and poorest reservations in the United States, Wind River Reservation, healing continues for the Sand Creek Massacre since 1864, while new murders are requiring local leaders to rethink the process of healing and prevention.

In September 2017, Andy Antelope, a Northern Arapaho man, was shot by a police officer at the Riverton, Wyoming Walmart. In November, the county attorney ruled that the police officer acted in self-defense and did not press criminal charges.

The killing stirred leaders in Riverton to reorganize to continue to build the relationships between the non-tribal and tribal communities in the area.

“We don’t want to call it this, but there is still a lot of racism in our community,” said Gail Ridgely, a member of the Northern Arapaho Tribe and a United Methodist. As a retired teacher with more than 25 years served in public schools, and a member of the U.S. Commission on Civil Rights for Wyoming State, he knows and understands where Native Americans stand in the community decades ago and right now.

“When I was growing, up teachers used to tell me that [Native Americans] couldn’t learn,” he said grimly. He also remembers signs on restaurant windows that said, “No Dogs Allowed,” referring to Natives, at the time.

Racism is far from gone, he explained. He was disappointed to say that people still walk around with fear in Riverton. He said youth claiming to be part of the KKK were recently reported entering and taunting children at local schools of mostly Natives.

Ridgely is also one of the board members on a newly organized community group called, Riverton Peace Mission, headed by Chesie Lee, a local lay United Methodist. The group is working to organize a healing peace talk to voice concerns, express grief and share space for the recent murder of Antelope.

The event is called, “Toward Community Harmony: Healing for Tomorrow” and will be held from 10 a.m. to 1:30 p.m. this Saturday, Jan. 18, at the Central Wyoming College Intertribal Community and Education Center in Riverton.

“I wanted to do more to really allow others the opportunity to have a connection,” she said.  Despite these efforts, there is “still hostility in Riverton.”

Lee has been working to promote education and compassion between tribes and non-tribal members for the greater part of the last decade personally and as a leader of the Wyoming Association of Churches. She was partly responsible for the creation of the Wind River Native Advocacy Center to give tribes their voice for issues.

“We want to address healing and try to get people involved in a positive and constructive way and work together,” said Ridgely, who has a positive outlook for the event. He said he expects local government and leaders to attend the healing circle. 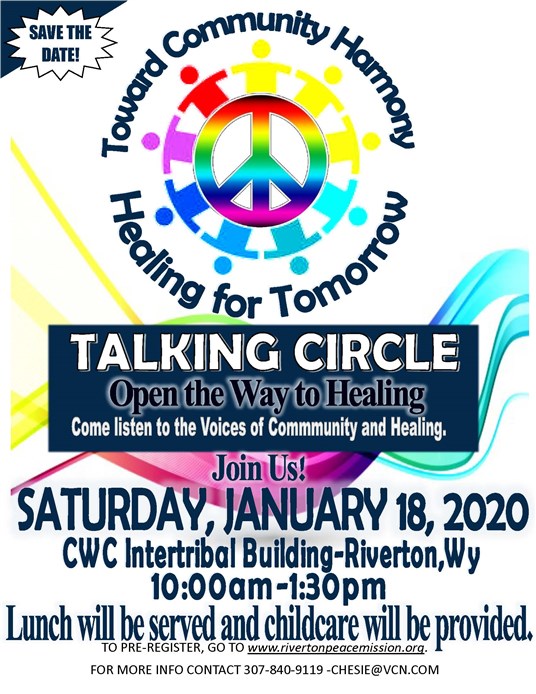