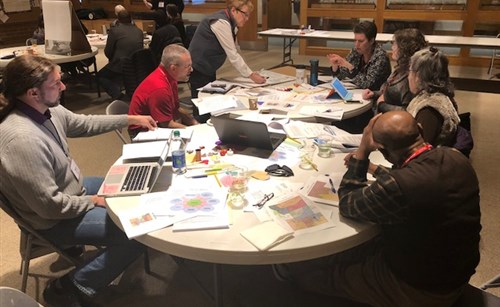 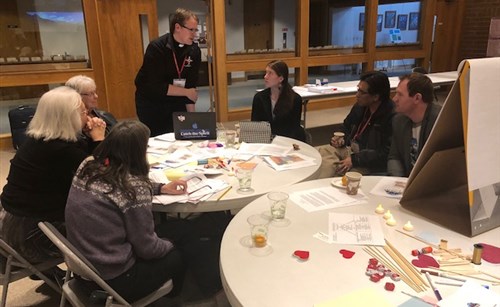 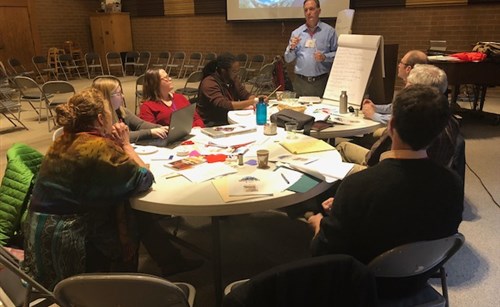 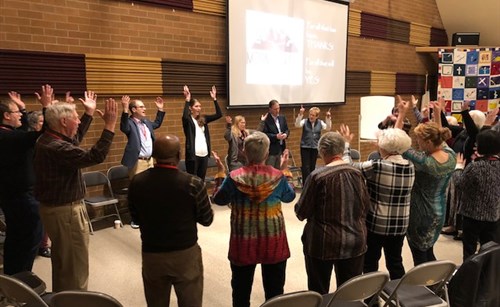 It was a weekend of dreaming, but also putting those ideas into a blueprint for the formation of a new annual conference. About 30 clergy and laity attended a two-day retreat Jan. 12 and 13 at Hope United Methodist Church in Greenwood Village, Colorado to discuss Mission Shaped Future.

The group, comprised of leaders from Rocky Mountain and Yellowstone annual conferences, drew up action plans on connecting, equipping and supporting the future of the Mountain Sky Area. Those plans will be incorporated into the petition to be proposed at the 2018 Joint Annual Conference Session in Ogden, Utah this June.

"It's a rare privilege that a generation gets to rethink a model of ministry that can be reframed or reformed to meet the needs of present and future generations," said Mountain Sky Area Bishop Karen Oliveto.

Much of the drafts that were laid out were also based on the report by consultant John Wimberly that was released last week by Bishop Oliveto. The report recommended major shifts in how the Mountain Sky Area is organized. Those changes included staff, conference ministry committees and even location of the main office. The central theme in Wimberly’s report was strengthening the local church.

Team members came from different corners of the Mountain Sky Area, with several who already served in previous Mission Shaped Future groups. Expectations were high for the weekend retreat, with each person optimistic that something tangible would be created.

“We exceeded my expectations,” said Stacey King, president of the Yellowstone Conference United Methodist Women. “We came out with great hope and a lot less fear than what was being projected beforehand. There was so much love and possibility in the room that I feel we’ve got everything to work with.”

For King, the support of UMW is crucial in the final days of Mission Shaped Future. “Historically, UMW has spoken out on key issues, such as women’s ordination and gender equality. I believe we are already in a key position in our legacy to lead,” she said.

The recognition of laity participation is what drives Rocky Mountain Conference Co-Lay Leader Margaret Hotze in the process. “I’m pleased that the work of the laity was affirmed in the new conference plans,” she said, adding that the Rocky Mountain and Yellowstone lay leaders “look forward to working together.”

“I trust the Mission Shaped Future team is going to do hard work. But we need to acknowledge that it's going to be messy,” said the Rev. Morie Adams-Griffin, a pastor and chair of the Yellowstone Conference Council on Finance and Administration. “For some of us who don't like messy, it's not easy. But to have that trust that together we'll figure it out. After all, isn't the whole Christmas story about God entering in the messiness of life with us?"

Indeed, the Holy Spirit was at work at the retreat, enlivening the teams to be creative in the Mission Shaped Future process. They spent much of their time in small groups, laying the foundation of what will be the design of the new annual conference. The heart of it was the local church and truly empowering clergy and lay leadership in those churches. For Rev. Calob Rundell, a pastor in Rocky Mountain Conference, the emphasis on circuits was vital in creating that empowerment.

“It’s a radically different vision of how we organize the leadership,” Rundell said of the circuit model. “We’re simplifying … we’re doing something new. There is a lot of hope in empowering, equipping and motivating local churches.”

At the end of the retreat, each group presented their final drafts to be refined into a full report that will be later released. Individuals then committed to doing their part for the success of Mission Shaped Future. For more information and to get updates, visit the Mission Shaped Future page on the Mountain Sky Area website.