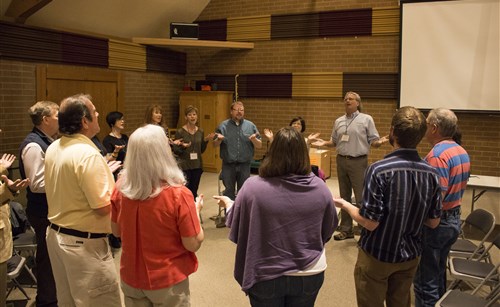 Participants sing "My Mind, My Heart and My Soul" during the Cast 1 Coaching Training event April 5 at Hope United Methodist Church in Greenwood Village, Colorado. 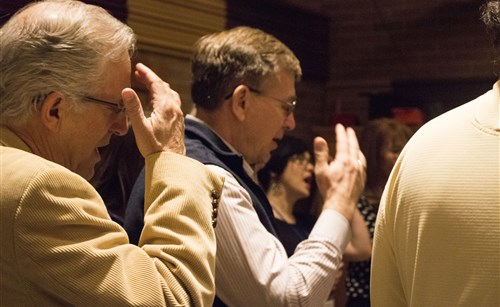 The Reverend Paul Kottke, Metropolitan District Superintendent, left, and Rev. Gary Geiman, of Billings Hope UMC in Montana, sing "My Mind, My Heart and My Soul." 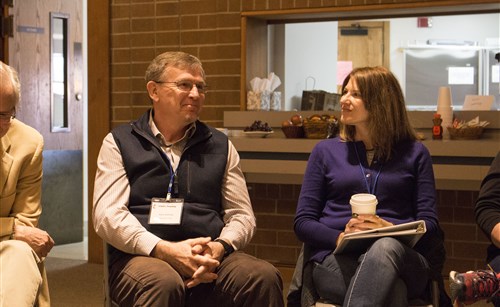 CAST 1 participants introduce themselves using a one-word adjective and share something remarkable about themselves. 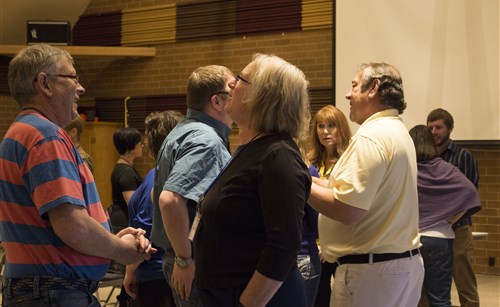 Participants then go through a 1-minute "speed networking" style exercise to again introduce themselves and ask each other "What do you want?"
Story and photos by Charmaine Robledo
Director of Communications, Mountain Sky Area of The United Methodist Church

Determining goals, creating action plans, and following through with accountability were some of the objectives participants learned at the CAST 1 Coaching Training from April 5 to 6 at Hope United Methodist Church in Greenwood Village, Colorado.

"Coaching is about action," said the Reverend Chris Holmes, a professional coach with the International Coach Federation at the opening of the event. "We believe in your wholeness and resourcefulness."

Led by Holmes and Rev. Youngsook Kang, Director of Mission & Ministry for the Rocky Mountain Conference, about 15 clergy and lay leaders of the Mountain Sky Area of The United Methodist Church participated in a two-day Coach Approach Skill Training (CAST) workshop.

The workshop aims to apply "the skills of coaching to the realm of everyday ministry in the life of the local church," according to the manual's introduction.

At the beginning of the workshop, Holmes had participants introduce themselves using a positive adjective and state something remarkable. They then paired off in a "speed networking" exercise introducing themselves to each other and asking "What do you want?"

Although some found the exercise refreshing, others found it invasive and uncomfortable. However, Holmes said that "a large part of coaching is being present, asking a question, and listening deeply."

He then went further into this coaching aspect by speaking one-on-one with each person, talking through challenges and providing direction. The action came from the person being coached, not the person doing the coaching.

"Coaching is not counseling," said Kang. "It is strength-based."

Prior to coaching, Holmes was a district superintendent in the Baltimore-Washington Conference for seven years. He has written two books on coaching and the manual for CAST 1, 2, 3 and 4. Kang is also a certified life coach through the International Coach Federation. She helps teach coaching at the annual training for District Superintendents at Lake Junaluska in North Carolina. Holmes said through Kang's leadership and ministry, her vision for peer coaching in the Mountain Sky Area is coming to fruition.