From July 12 to 15, a handful of Mountain Sky United Methodists joined thousands of attendees in rural North Carolina at the Wild Goose Festival—an art, music, and story-driven faith-inspired event. The annual gathering draws attendees and presenters from across both the country and theological spectrum. Some of this year’s highlights were keynote preacher Otis Moss III, civil rights icon Ruby Sales, and theologian Barbara Brown-Taylor.

This year’s lineup also included a number of sessions led and facilitated by Mountain Sky United Methodists. District Superintendent Margaret Gillikin, Rev Tom Henderson-Owens, the Rev. Ann Henderson-Owens, and Young People’s Ministry Developer Andy Millman hosted a panel discussion titled “Living into a New Reality as United Methodists.” In this panel, they invited sharing and discussion about the joys and challenges that they’ve encountered since the 2016 General Conference in Portland, Oregon. They talked about the gifts that come with the diversity of thought in the Mountain Sky Conference, and left those in attendance with a message of hope for The United Methodist Church. 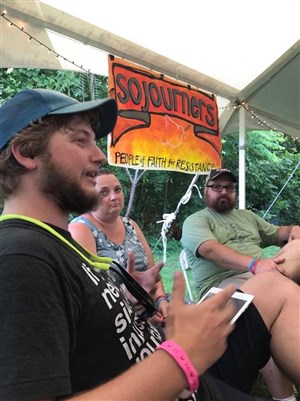 The Rev. Roger Wolsey, director of the Wesley Foundation at Colorado University - Boulder and longtime festival attendee, gave a talk about Christian Mysticism titled “Mystic or Bust!” During the conversation, Wolsey drew on his experiences as a pastor, author, and campus minister in Boulder to present a vision of Christianity for the 21st century. This vision draws from the deep wells of experience across the religious spectrum.

In addition to the panel, Millman also wrote the content for and facilitated a roundtable conversation with the Brew Theology network. Brew Theology is an interfaith network of communities across the country who meet in pubs, breweries, coffee shops, and churches to engage in deep dialogue. They have been particularly effective at utilizing these “third spaces” to bring together those more comfortable in a less-traditional church setting.