On a morning in late May, she had just placed five cards in her mailbox at home before driving to her church.  Now, in her pastoral office at First United Methodist Church in Marriott-Slaterville, the Rev. Kim James just finished sealing up five more envelopes and praying over them.

The cards Rev. James was sending had been laid out on table in 30 sets of five, ready for congregants to pick up in a socially-distant and safe manner in the church narthex.  These prayer card sets had been prepared by members Jonathan and Victoria Hair as a 150-card project addressed to United Methodist churches in Utah, Wyoming, Montana, Idaho, and Colorado.  Some other-denomination churches in the Ogden area were also included in the 150 cards. 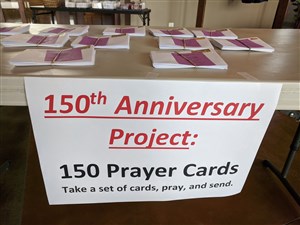 First United Methodist Church chose to do this project as one of many ways they hope to recognize their congregation’s 150th anniversary this year.  In another 150th-anniversary project, History Committee Chair Bill Wade worked out a collaboration with staff and students at Weber State University to have the church’s old records digitized and stored in the cloud, so they can be searched more easily.

Prior to a postponement caused by the coronavirus pandemic, First UMC had planned to hold a big celebration the weekend of June 27-28.  That date was chosen because, on June 28, 1870, the first Methodist preacher arrived in Ogden via train and preached the first Methodist worship service in the Union Station.  From that start, Ogden’s First United Methodist Church was born.

In its early days, the fledgling congregation rented space in the Ogden Theatre Building, Cordon’s Hall, and Leavitt’s Hall before purchasing two successive properties near 24th and Washington.  Later, the congregation built a church at 26th & Jefferson, which they occupied until their 2008 move to 1339 W. 400 N., in Marriott-Slaterville.

In their original 150th-anniversary plans, the congregation’s History Committee had scheduled Bishop Karen Oliveto to come and speak on June 28.  Bishop Oliveto oversees the five-state Mountain Sky Conference.  Due to the unknown developments of the coronavirus and the complexity of the bishop’s schedule, it is unclear if future anniversary plans will include her.

Now, instead, the congregation is brainstorming other ways to celebrate safely.  Thus arose the idea of sending out prayer cards to their sister churches in the region.

The printed cards state, “We at First United Methodist Church in Ogden (Marriott-Slaterville), Utah, are celebrating our 150th anniversary this year.  One way we’re celebrating is by praying for 150 other churches in Utah and surrounding states.  This card is sent with the prayer that you and those in your community are feeling the strength of God’s love during this time of uncertainty.”

As congregation members pick up sets of five cards, they are instructed to sign their own personal name.  They can add an extra note or have a child draw some decorations if desired.  Then they are asked to place the card in the pre-addressed and stamped envelope, say a prayer for that sister congregation, and mail the card.  The congregation prays that they can share with others the blessings they have received from God over these 150 years.