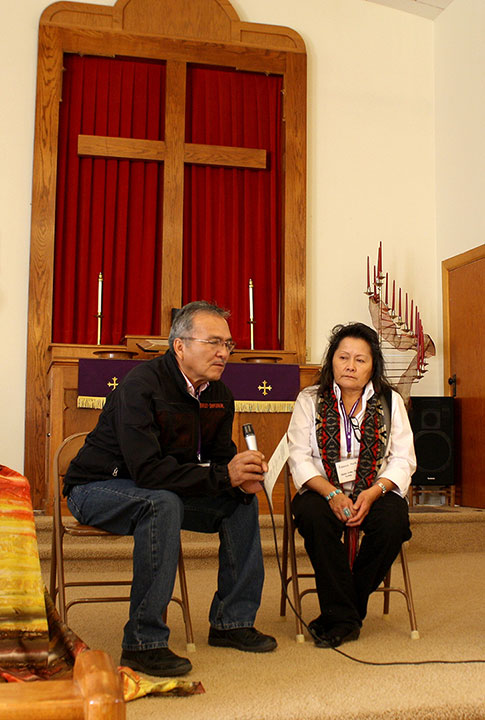 Growing up as a Navajo in a Christian boarding school, Pastor Norman Mark said he wasn't able to experience the traditional practices of his heritage.

"There were a lot of no-nos with my tradition," Mark said. "But I kept searching."

After serving in the military, Mark eventually found the Methodist Church – a place "that could recognize me as a Native and as a Christian," he said.

This sense of inclusiveness prompted Mark to start Native Grace Intertribal Fellowship at the First United Methodist Church of Cortez, Colorado, where he is currently serving as a part-time local pastor.

"Native Grace Intertribal is for everybody, any Christian," Mark said. Since its start 18 months ago, he said the service gets an average of 25 to 35 people attending every Sunday and attracts people from New Mexico, Arizona and Utah.

Mark said the service is a contemporary setting and mostly spoken in Navajo. He also plays his flute and box guitar, incorporating Native music along with United Methodist hymns. He said this month they are getting ready to host a traditional Native service with food.

"He came to me and asked me to serve as an advisor," Montoya said about Mark beginning Native Grace Intertribal Fellowship. "He knows a lot about my journey in The United Methodist Church. We encountered some of the same things."

Montoya, also a Navajo, is a retired ordained minister in the UMC.

With the type of ministry that Mark started, Montoya said he "embraces the whole person." The service reflects "a lot of things Jesus would say," she said, adding that "God is a loving God, not a fearful God – to live in harmony and beauty and to be accepted."

Montoya said there are many requests for Mark's ministry in the Shiprock area, especially to reach out to young Native people. "Ministries like the one in Cortez will open up doors," she said.

Montoya will be visiting First United Methodist Church in Cortez on April 19 for Native American Ministries Sunday. Native Grace Intertribal Fellowship holds services every Sunday at 2 p.m. Pastor Norman Mark lives in Utah with his wife Rebecca. He can be reached at the church at 970-565-3002.

Native American Ministries Sunday is April 19. This Special Sunday recognizes and empowers pastors, congregations and seminary students to honor and celebrate Native American culture as they develop new ways to worship Christ. Click here for more information and to donate.