On Oct. 27, 46-year-old Robert Bowers entered and opened fire in the Tree of Life Congregation Synagogue of Pittsburgh, Pennsylvania. Bowers attacked during a baby-naming ceremony, killing 11 and injuring six. The gunman, who had previously posted numerous anti-Semitic rants on social media, is now being charged with 29 federal counts. Pittsburgh's Public Safety Director, Wendell Hissrich, said this crime scene was one of the worst he has seen.

Bishop Karen Oliveto, of the Mountain Sky Episcopal Area, gave a statement on Facebook via her Saturday social media message regarding the tragedy:

"I am praying for those who gathered for their Sabbath today at the Tree of Life Synagogue in Pittsburgh, Pennsylvania, only to have their worship cut short by violence: The Image of God shattered by bullets propelled by anti-semitism."

Tom Wolfe, President of Iliff School of Theology in Denver, Colorado also spoke out on the act of violence:

"Just this past week, Iliff was a co-sponsor for the Interfaith Alliance of Colorado's annual Force for Good Awards. Because of recent events, I am moved to lift up the jointly shared sanctuary initiative of Park Hill United Methodist Church and Temple Micah. Their work brings clarity that leads to goodness. These two congregations of different faiths, respectful of each other, worship according to their own traditions under the same shared roof and together join their social justice commitments to provide sanctuary for a woman and her family. Their distinct yet interactive lives provide a stark contrast to this week's barrage of suspicious and presumptuous rhetoric about the people of the caravan, attempted pipe-bombings, the massacre of Jewish congregants, and murders at the hands of a member of a hate group. These events come in the context of a hateful rhetoric that we have not come to terms with."

Bishop Moore-Koikoi, of the Western Pennsylvania Area, released a statement urging prayer and action toward unity:

"I urge all United Methodists to be in silent, reflective prayer for 17 minutes each day for the next 7 days for the Squirrel Hill and Jewish communities.  As you pray, I urge you not to suggest to God what you want God to do to bring about change. But rather, I urge you to listen to God so that God can reveal to you what to say and what to do in order to provide comfort to our Jewish sisters and brothers, the first responders, and all those for whom this tragedy reignites previous trauma.  Today, and for the next few days we need to focus on how we can demonstrate that we stand with the Jewish community, whether or not there is a synagogue in our town or community."

United Methodists speak out in wake of synagogue shooting

More than a thousand people turned out for a Oct. 27 vigil to honor the victims that was organized by students at Pittsburgh's Allderdice High School, near the scene of the massacre, the Western Pennsylvania Conference reported. An interfaith prayer service was held at nearby at Sixth Presbyterian Church. United Methodist clergy and lay leaders in the Pittsburgh District immediately reached out to the rabbis and synagogues to determine how they might be supportive. Read more

On Sunday, Oct. 28, the Anti-Defamation League Mountain States and Jewish Colorado held a community solidarity vigil at Temple Emmanuel in Denver, Colorado. The vigil featured speakers such as Mayor Michael Hancock, Governor John Hickenlooper, the chiefs of police of both Denver and Aurora, and faith leaders of Jewish, Christian and Muslim traditions. The worship space had to provide three extra rooms for the volume of supporters. Similar gatherings were held across the Mountain Sky Conference in Billings, MT, Bozeman, MT, Salt Lake City, UT, and one is to be held Tuesday evening in Cheyenne, WY.

See photos below of the event, courtesy of the Rev. Brad Laurvick: 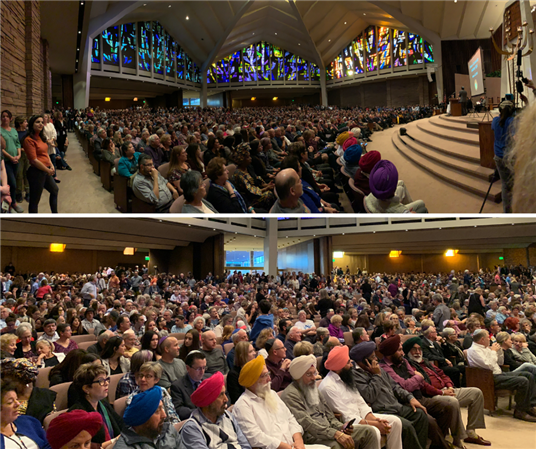