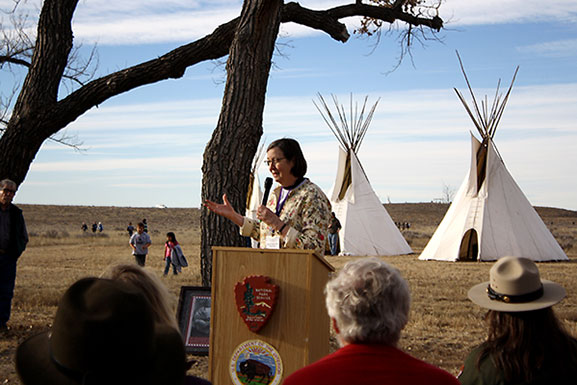 Dent added that Nov. 29 was "not a celebration, it is a commemoration."

"Tears are our most appropriate response," he said.

On Nov. 29, 1864, more than 600 U.S. Army volunteer soldiers -- led by Methodist ordained minister John Chivington -- attacked a peaceful camp of Cheyenne and Arapaho tribes near Sand Creek. Nearly 200 women, children and elderly in the camp were killed and many more left wounded. Soldiers carried and paraded the body parts of the dead through the streets of Denver.

Prior to the opening, the Rocky Mountain Conference held a Prayerful Preparation gathering with a time of reflection and education on the Sand Creek Massacre. Bishop Elaine Stanovsky led the event, which included a screening of a documentary on Sand Creek and a panel with Native American pastors Jerry Boles and Norman Mark.

Mark, a Navajo, said he teaches forgiveness and healing with his new church in Cortez, Colo., called Native Grace Intertribal Fellowship. He said that at the Sand Creek site, he'll play his flute "so they can sleep well."

During the 150th Commemoration and opening of the Spiritual Healing Run at the Sand Creek site, direct descendants of the massacre survivors spoke about their heritage and the meaning of this anniversary. Several thanked those in attendance for taking the time to be out at the site and participating in the commemoration events.

Reginald Killsnight, Sr., a chief from the Northern Cheyenne tribe, spoke at the opening ceremony and led a chief's song, along with other tribal leaders. The solemn song invited participants to listen for the voices of the Sand Creek Massacre victims and pray for continued healing.

After the opening ceremony, participants walked to the site's Monument Hill to see where the actual event took place.

Rev. Linda Bibb, of University Park United Methodist Church in Denver, said going to the Sand Creek site has a "sacredness" to it. "When you hear the wind, you can hear the voices. The site connects us to all humanity," she said.

Below: The headdress of Chief Phillip Whiteman, Jr., of the Northern Cheyenne tribe, blows in the wind at the Sand Creek Massacre National Historical Site during the 150th Commemoration and opening of the 16th Annual Spiritual Healing Run & Walk. Photo by Charmaine Robledo, Mountain Sky Area 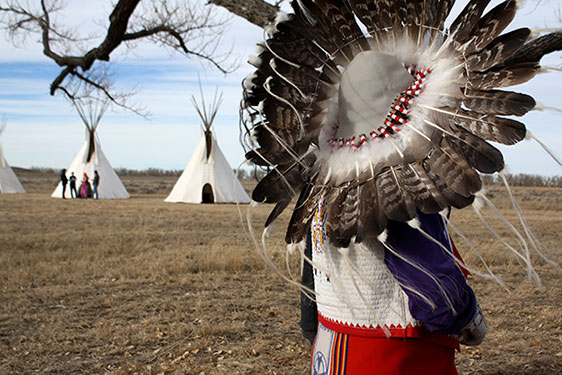