The purpose of this report is to share several things I learned and felt during the Pre-General Conference 2020 briefing in Nashville. I am a delegate who has never attended a general conference so I have a steep learning curve. When I state things incorrectly or use terminology that doesn’t fit, please let me know what I need to understand better. Overall, the agenda times proved fairly accurate and I appreciated that timeliness. 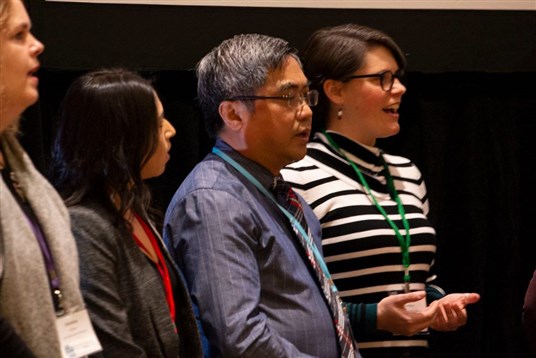 We arrived on Wednesday, Jan. 22, flying from Grand Junction, Colorado, through Dallas, Texas, in the early afternoon. I attended a reception that seemed to intend to welcome us to the Nashville area and to have us mingle with others attending the briefing. I was hungry. The food provided was quite amazing, ostentatious (prime rib), and we had essentially nowhere to sit in the reception area. Consequently, it proved rather difficult to visit with people you didn’t know, trying to eat standing up with a full plate and drink. My feelings varied from an appreciation of the efforts and food to disappointment about how tough it seemed to actually mingle which seemed to be a result of poor planning on the part of someone. I was able to interact with a delegate from Cal-Pac and then others from my own delegation.

All day presentations and panels began at 9 a.m. Bishop Bruce Ough from the Dakotas-Minnesota Episcopal Area spoke powerfully on the question "Is God Yet Among Us?" We took communion. We were welcomed by the communications team and the bishop from the Nashville area.

The Minneapolis Host Team for General Conference 2020 provided information on how they were preparing to welcome everyone.  The host team was and will, in Minneapolis, be wearing purple vests, so it might be useful to not dress in purple if you do not wish to answer questions for visitors.  Each delegate will be given a purple scarf knitted by someone who will also pray for them during the conference.  The welcoming attitudes expressed by the host team were uplifting and I entered the break feeling hopeful.'

One team discussed the origination and purpose of the General Conference 2020 theme: “And Know That I Am God.”  Then we heard about the major legislative plans proposed regarding the structure and future of the church.

Among the plans presented, my sense is that the Protocol has perhaps the best chance of passing. The Indianapolis Plan creators expressed willingness to amend their plan as necessary if the Protocol does not pass at the beginning of the General Conference. UMC Next also indicated support of the Protocol.  The Connectional Table with the Regional Conference approach may fit in as well.  I found it difficult to get a clear read on where the central conference representatives were coming from at this event, even after a panel of speakers gave us some perspectives.  They do seem to want unity in the denomination.

The Q and A time after the proposal presentations were somewhat disappointing as it wasn’t long enough for everyone who lined up to participate.

The Legal Considerations Panel provided information on pensions for clergy and the trust provisions that interested me. Wespath is proposing to completely move from Defined Benefit pensions to Defined Contributions, a move that I experienced in higher education that resulted in some disappointing results for faculty. Another “factoid” that I heard from this presentation was that District Superintendents have quite a bit of power when it comes to dealing with the local churches and the trust clause. 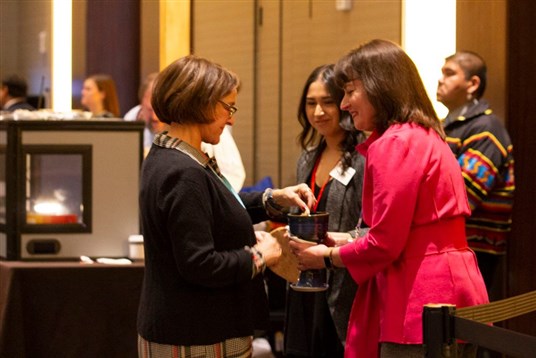 Our delegation group had breakfast together which provided a great opportunity to visit about what we were hearing and seeing at the briefing. Meetings began at 8:30 a.m.  We learned about how the General Conference works legislatively, how we will use voting devices and such.  We heard from a former member of the Judicial Council on the roles that the group will play at the general conference.

Some listening tools and human nature tips were provided to delegates in a break-out session, while communicators had a separate break-out. During lunch, we heard from a group of UMC ethnic initiatives.  I found it intriguing that the various ethnic groups have plans and ministries across the denomination that seem to be thriving for groups like the Native Americans, the Black Church, Asian Americans, Hispanic/Latino, and Pacific Islanders.

Our own Charmaine Robledo, Director of Communications for Mountain Sky, served as the afternoon moderator for panels on the Status of Women, Young People’s Voice in the church, the revised social principles, and our social witness.  Additionally, more information was provided on the clergy pension plan proposal, a resolution to implement full communion with the Episcopal churches, and some tips for delegates on sharing the story of general conference.

Overall, the briefing was beneficial to me as a delegate who has not yet attended a general conference. I learned more about the proposed plans and the Protocol. I met other delegates and GC agency employees.  My sense is that Minneapolis will be a welcoming host for the GC2020 events. It also felt to me that a majority of persons at the event are supportive of the UMC denomination becoming more inclusive through changing the Book of Discipline and that many want to see some version of the UMC continue.