Pushing for full LGBTQ rights aim of 'Toward an Inclusive Church' 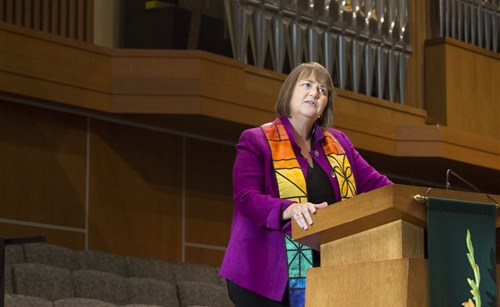 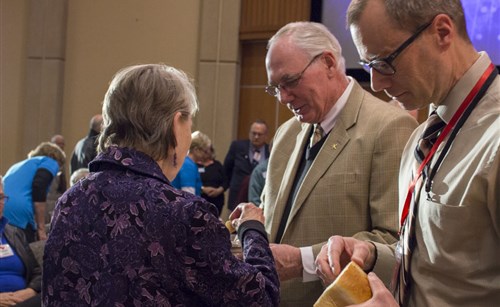 The Rev. Randy Jessen, left, of Parker UMC, and Rev. Andy Dunning, of St. Andrew UMC, serve communion during the closing worship of "Toward an Inclusive Church" Nov. 14. Jessen is part of the founding council of the Wesleyan Covenant Association. 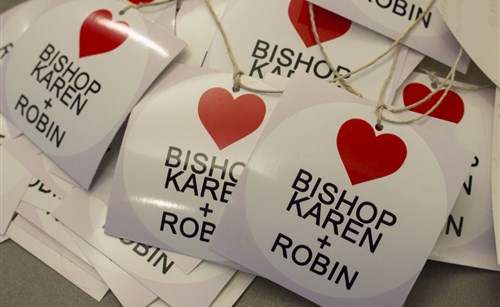 Necklaces showing support for Bishop Karen Oliveto and her spouse, Robin Ridenour, were passed out during the "Toward an Inclusive Church" event Nov. 14. Ridenour is also a United Methodist deaconess.
Story and photos by Charmaine Robledo
Director of Communications, Mountain Sky Area

The dream of a fully inclusive United Methodist Church is one step closer to reality as more than 200 people attended the “Toward an Inclusive Church” event Nov. 14 at St. Andrew UMC in Highlands Ranch, Colorado.  As St. Andrew’s Senior Pastor Mark Feldmeir welcomed attendees, he noted that the church is one of the largest reconciling congregations in the denomination.

The aim of the “Toward an Inclusive Church” event was to build bridges instead of walls. It challenged attendees to intentionally create and be a community that includes all people – especially LGBTQ people – into the life and ministry of The United Methodist Church.

The event was sponsored by the United Methodist Association of Retired Clergy (UMARC), a new group that formed following the Judicial Council decision in April on whether an openly gay clergy person can serve as a bishop. Martz and the Rev. Don Messer are two of the group’s founding officers and have been longtime advocates for LGBTQ rights.

As Mountain Sky Episcopal Area Bishop Karen Oliveto introduced retired Bishop Charlene Kammerer as the preacher of the opening worship, she said, “I am clear, very clear that I am where I am today because of those who have gone before me – those who made a way when there was no way.”

In her sermon, Kammerer said, “I believe that extending the table of God’s love might be the best description of Jesus in the Gospel.”

She based her sermon on the scripture of Luke 14:15-23, which has Jesus telling the story of a man hosting a large dinner and extending the invitation to all people “so that my house will be filled.”

“I believe … because The United Methodist Church taught me to believe this: there is a place for everyone at God’s table. This is the simple and profound message of Jesus of Nazareth.”

Haller continued: “In a time of great polarization and uncertainty in our country as well as in our beloved United Methodist Church, I have great hope. I am so excited about the future because you and I are witnesses to God’s grace, compassion and power. God is going before us right now to prepare a way forward and calls us to make a difference every day by our words, our actions and our service.”

For Bishop Jung, he said “it should be the heartfelt desire of every Christian that each and every child of God, made in God’s image, might enjoy full inclusion and holy fellowship.”

“When the church of Jesus Christ contemplates judgment, division, schism, or punishment, it simply has too much time on its hands and it has lost focus on its primary task and mission,” he said, adding that when the church focuses on being a source of love, joy, peace and kindness, it would not have the time, energy or inclination to do anything else.

Focusing on the future of The United Methodist Church

Participants attended morning and afternoon break-out sessions – or “focused conversations” – on a variety of topics, including the Commission on a Way Forward, understanding reconciling congregations, understanding the Wesleyan Covenant Association, dismantling racism, and on whether schism is inevitable. The conversations were a way to educate attendees, but also advocate for people on the margins.

Rev. Brad Laurvick and Rev. Janet Forbes discussed the process and work of the Commission on a Way Forward, expanding on the press release the Council of Bishops sent Nov. 9, which outlined three sketches of models for the future.

Forbes said the sketches were like, “Painting with one hand and erasing with another,” emphasizing that the Commission’s work continues and is not yet final.

The session that focused on schism discussed the financial implications for The United Methodist Church, particularly the Central Conferences of Europe, the Philippines and Africa. Messer and the Rev. Charles Schuster led the conversation.

Messer noted that the majority of the money raised for The United Methodist Church is within the U.S., except for some areas of Europe. Parts of the discussion delved into the role of the African delegation and how their votes would impact the 2019 special session. They also mentioned the Commission on the Way Forward and the options it outlined.

One participant, Gary Curtis, said, “Either option is going to hurt someone.”

“I dream a church”

The “Toward an Inclusive Church” event ended with closing worship and Holy Communion. In her sermon, Bishop Oliveto said, “I am a pastor at heart. Pastoral relationships require me to climb the wall and build a bridge, over and over and over again.”

“I dream a church that is willing to lean into the tension of difference that exist within our denomination, whether race or class, or ethnicity, sexual orientation, gender identity or ability, and allow ourselves to be surprised by what we learn about God and Jesus and faithfulness within the tensions of those differences. I dream a church.” 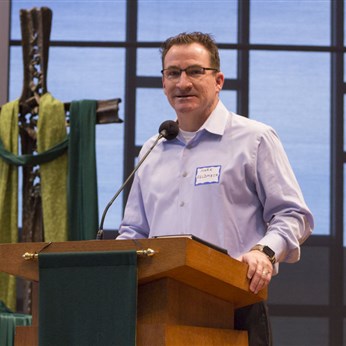 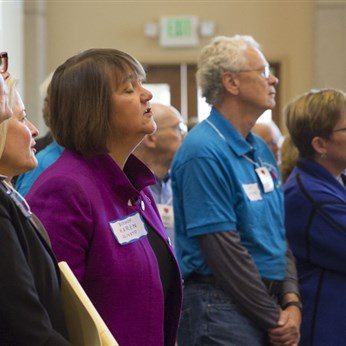 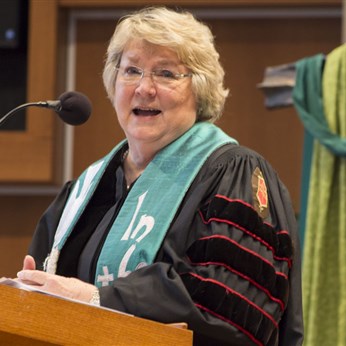 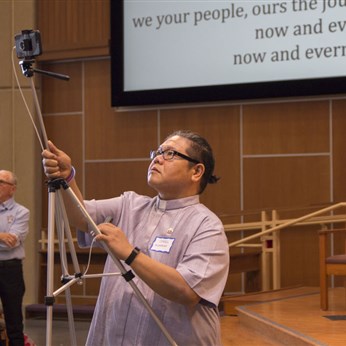 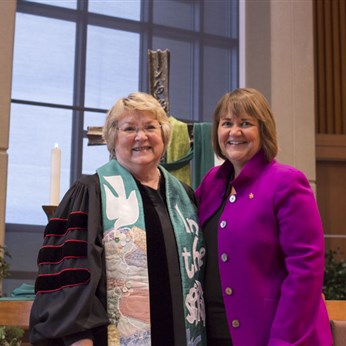 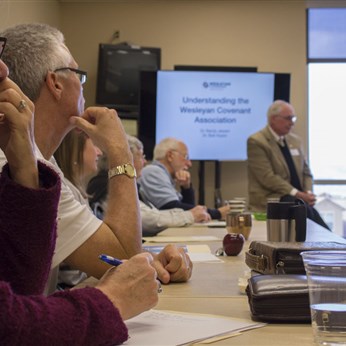 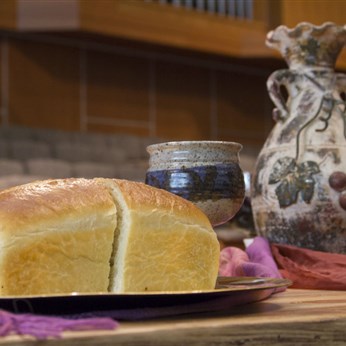 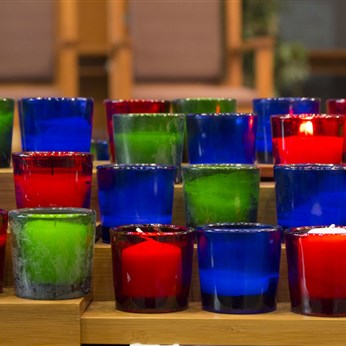 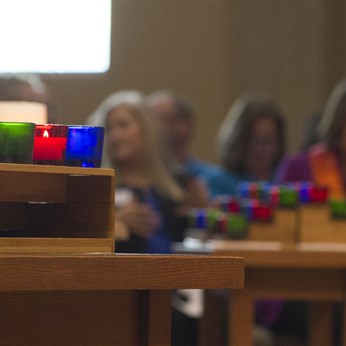 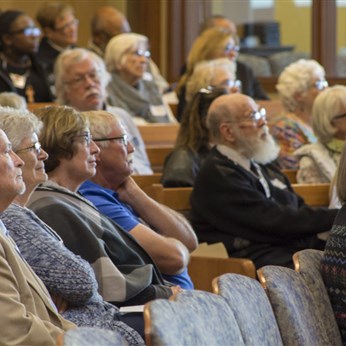 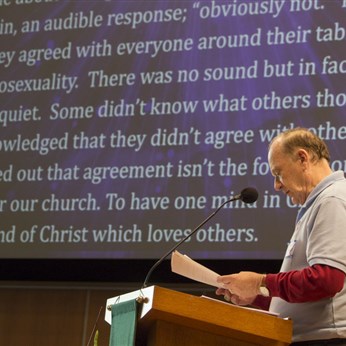