On July 30, the congregation of Rinn United Methodist Church in Frederick, Colorado consecrated a new cross during worship. The original sanctuary cross, which was not in good shape after two decades of service, was repaired. But rather than leave it as it was, Rinn’s leadership voted to do some large scale improvements. The desire was to give worshipers an even more beautiful symbol to help them focus on God during worship – a cross that stood out for all to experience the Gospel message!

Thanks to a kind memorial gift from the Anderson Family, in memory of their father, Craig, a giant oak veneered cross was constructed. The build team, led by Barry LaSalle and the church trustees, renovated the existing edifice and installed the new cross over a period of two months. The chancel area was a mass of scaffolding and construction equipment for the better part of May and June! 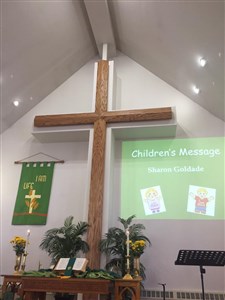 Several visitors were present for the consecration service, including previous pastors Rev. Barbara Johns-Schleicher, Rev. Dr. Warren Napier and Rev. Sandy Stewart. Members of the Anderson family were also in attendance, as well as Peaks and Plains District Superintendent Rev. Skip Strickland. The celebration included a sermon on the meaning of the cross delivered by current Rinn pastor, Rev. Bryson Lillie, and three musical numbers featuring members of the Anderson family. Worship was followed by an outstanding potluck lunch and reception. Everyone present had a blessed day of community and fellowship! Thanks to all who participated!

Rinn UMC has undergone several major projects every couple of decades in the last 60 years. In 1958, they moved the entire church building to the parcel of land it currently resides on. Then 20-plus years later in 1980, they put a gleaming white steeple on the roof, easily marking Rinn as a church to people driving by on nearby Interstate 25. In the mid-1990s, a new sanctuary was built with the most notable feature of a massive white cross in the chancel area, which covered a large support beam and two organ speakers.

Here’s to hoping that the new cross inspires a wealth of divine energy and enthusiasm in the Rinn community and their mission field. And that it won’t take them another 20 years to decide to do something amazing!