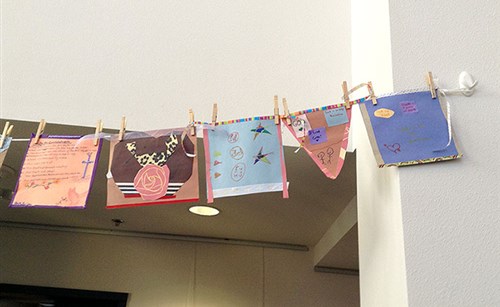 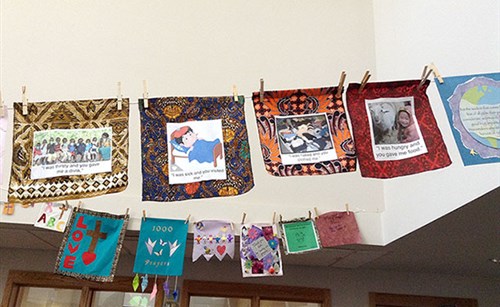 The congregation at Smoky Hill United Methodist Church took on a special project during Lent this year. They made and shared prayer flags.

Prayer flags have been part of many religions. They are simply visual representations of prayers and it is thought that when they were hung outside the wind would carry the prayers to God. The Gallery Committee at Smoky Hill United Methodist Church came up with the idea to ask the congregation to join us in making prayer flags during Lent.

Before Lent we visited a few adult classes, the men’s club and of course, our quilting group. We asked them to make some prayer flags which could be put up at the very beginning of Lent and inspire other congregants to make prayer flags.

Sunday school classes came to workshops each Sunday morning during Lent and talked about prayer. Then each child made a prayer flag to hang in the gathering space outside the sanctuary. After each service, “kits” with instructions and a few pieces of paper and fabric were handed out to individuals and families to take home and make before the next Sunday. Every Sunday people handed in their prayer flags and the gathering space became crowded with prayers.

What happened during this process was a surprise even to those of us who planned the event. People were excited about their prayer flags. They showed them to others and talked about the prayers and the people and ideas that they represent. They started making connections. Our building also houses a Spanish Language Ministry and we are always looking for ways to connect with them. We gave them some kits and they came back to us with prayer flags and we made a connection.

Some congregants explained their prayers and their flags to our committee members as they handed them in. Here are some examples of their stories:

And on and on! With each story we made a connection. We hung a total of 107 prayer flags during Lent and we made almost that many new connections in our congregation.

The Gallery Committee is amazed (although not really surprised) at the incredible artistic ability of our congregation. And we were amazed when the prayer flags created so many connections in and out of our church building.