Sometimes all you need to get people to a church event is a great cause, some good publicity, and a steaming bowl of chili. All these were present Oct. 19 for the First Responders Chili Cook-off in Loveland, Colorado. Sponsoring the event was a combined mission team from Trinity United Methodist Church and First Congregational Church, two congregations that sit 100 yards from each other in downtown Loveland. Despite being neighbors for the better part of a century, this was the first time the congregations could remember working on such a venture.

“It was out a bit rough,” said Debbie Huff, chairperson of Trinity UMC’s Missions and Events. “The first couple of meetings were awkward because we didn’t know each other, but by the end of the process we were all friends in Christ.”

Joining together at the invitation of Loveland’s mayor, Jacki Marsh, the churches were invited to determine a way to highlight the city’s emergency responders. Perhaps putting local police, firefighters, and paramedics against each other in a chili cook-off fundraiser would be something the public could support? The two churches loved the idea, and within weeks a committee of 12 to 15 people was hard at work. The response from the greater Loveland community was very encouraging.

Soon, teams from every first responder agency were involved.  A group from a local retired firefighter unit quickly joined in as well. Finally, two local nonprofits, Community Kitchen and 137 Homeless Connection, were designated to receive the funds raised by the event. It was all coming together nicely.

“I loved how all the pieces fell into place,” said Debby Groover, another Trinity UMC member on the team. “There were many bumps along the way, however, we didn't let those bumps get in the way of following through with our purpose for the event. I thoroughly enjoyed working with the combined team.  It was fun to get ideas from everyone.  We didn't always agree but we always worked through it.”

After months of refining the event, the team had a date, time and format selected. The information went out on Facebook, quickly going viral. As different organizations and individuals shared the event page, an estimated 45,000 people saw the event.  250 people bought tickets in advance with much more inquiring about admission at the door. Seeing this, the team knew they had a potentially awesome event at hand.

With the first responders bringing 12 giant batches of chili, it was decided to charge $5 dollars for six small samples. Each ticket purchased would give one vote for a “People’s Choice Chili,” while three local chefs would determine first, second and third place. All net proceeds would go to charity. So, as the team set up in Foundry Plaza on Saturday, Oct. 19, all that was left to determine was how many people would actually show up.

Even before 11 a.m., people started lining up and continued to do so for the next hour and a half. “It was amazing,” said another Trinity UMC volunteer, Bonnie McDonald. “I kept looking up expecting the line to get smaller, but it never did!” In the end, $3,171.45 was raised for charity, while the firefighters, active and retired, swept the awards. An estimated 425 people enjoyed the event. 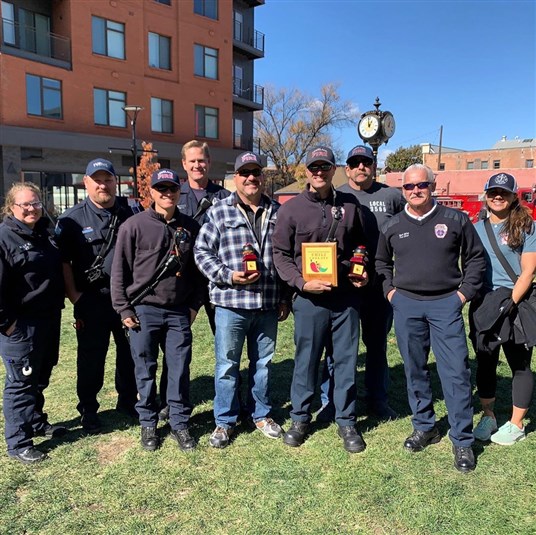 After the trophies were handed out, Mayor Marsh playfully teased the police and paramedics, “Step your chili game up,” she told the defeated teams. “I hope we can do this again next year so you can come back with something even better!” It is a challenge Trinity UMC and First Congregational are looking forward to taking up. Here’s to hoping 2020 is a banner year for chili, the Loveland community, and the mission and ministry of both congregations!