Two United Methodist Church pastors were elected to public school boards in Colorado elections this week. The Reverend Brad Laurvick will represent District No. 5 of Denver Public Schools and the Rev. Jeremy Scott will represent Weld School District RE-5J. Laurvick has been the pastor of Highlands UMC in northern Denver, Colorado since 2012 and a pastor since 2009. Scott began serving as pastor to the UMC of Johnstown in Colorado in 2018.

Laurvick's passion to serve on the Denver Public School Board was driven by his commitment to equity in the school system.  He referred to gentrification and the achievement gap of students of color and lower-incomes. 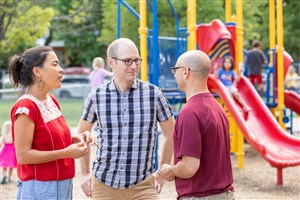 “In my son’s school, we lost 46 kids in one year when parents couldn’t afford the rising rent [in Denver],” Laurvick said. “Most of those students were students of color with working parents,” he added.

Laurvick’s campaign centered on supporting struggling schools rather than closing them, widening conversations with the community about important district decisions, and increasing and retaining the number of teachers of color in the classroom.

“My faith drives my call to serve the community,” he said. “Love, acceptance, justice and hope guide good policy.”  The fact that 63 percent of white students are reading at grade-level while only 20 percent of students of color are is “immoral and unconscionable,” he said.

Laurvick was endorsed by the union backing Denver Public Schools, Denver Classroom Teachers Association (DCTA). Union-backed school board members will now have a majority on the school board – an event that has not occurred in nearly 20 years, reports say.

While Laurvick will be putting his efforts toward affecting politics, Scott will be focusing more on affecting the economics of his school district. 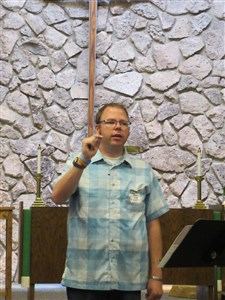 Scott explained that his school system is in dire need of functioning, modern-day facilities as well as an updated and consistent curriculum. Weld County is dominated by oil, gas and agriculture, he explained; however, the rapid growth of the Denver area is pulling in many families to Weld County. Scott himself is a transplant who moved from Billings, Montana just a year ago.

“[Johnstown] is turning younger and the schools are expanding,” he said. “The school system needs to adapt to that reality.”

There is currently a significant transition happening between former, older school board members and the superintendent, he said. The previous superintendent served for 17 years. Scott intends to mend that gap through his discipleship and “gifts and graces,” as he put it.

It isn’t a surprise that three out of five of the RE-5J school board members are United Methodists, he explained. Like John Wesley who was a strong proponent of education and children, the community is very supportive of public education.

A correction was made to this story Nov. 11, 2019. There are three United Methodists on the Weld RE-5J school board, not four.

Why is the Church getting involved in politics?

Since the days of John Wesley, Methodists have had a strong belief in social justice, mission and outreach ministries. In our 2008 Book of Resolutions, we state,

Taking an active stance in society is nothing new for followers of John Wesley. He set the example for us to combine personal and social piety. Ever since predecessor churches to United Methodism flourished in the United States, we have been known as a denomination involved with people's lives, with political and social struggles, having local to international mission implications.Such involvement is an expression of the personal change we experience in our baptism and conversion.

The United Methodist Church believes God's love for the world is an active and engaged love, a love seeking justice and liberty. We cannot just be observers. So we care enough about people's lives to risk interpreting God's love, to take a stand, to call each of us into a response, no matter how controversial or complex. The church helps us think and act out a faith perspective, not just responding to all the other "mind-makers-up" that exist in our society.