The ordination service occurred as Bishop Oliveto was presiding over her first annual conference, the annual meeting of lay and clergy leaders from across a region that includes Montana, a large chunk of Wyoming and a small slice of Idaho. She will preside next week over the gathering of the Rocky Mountain Annual Conference in Denver, where there are six candidates for ordination as elders and eight for commissioning as deacons. 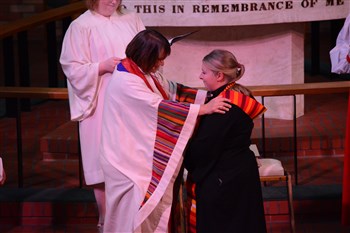 After the two-and-a-half-hour service, Bishop Oliveto took a deep breath and tears formed in the corner of her eyes when reminded of the historical significance of what had just occurred.

“I was so focused on Sami’s ordination, and the good things that were happening at the conference, that I hadn’t had a chance to let it sink in about what this means to LGBTQ people,” Bishop Oliveto said. “It’s humbling to be able to do this, to be able to say to my LGBTQ siblings that we’ve taken another step forward. This is a movement of the Holy Spirit for all LGBTQ people in our church.”

Bishop Oliveto has been an open, out lesbian for more than 35 years. She and her spouse, Robin Ridenour, a United Methodist deaconess, were married in 2014.

She was elected bishop in July 2016 during the quadrennial meeting of The United Methodist Church’s Western Jurisdictional Conference in Scottsdale, Ariz. She was elected on the 17th ballot after the eight other candidates for bishop had dropped out.

Bishop Oliveto was assigned to be the spiritual leader of 400 United Methodist churches in a region comprising Colorado, Utah, Montana, Wyoming, and a small slice of Idaho. It covers nearly 450,000 square miles. She is based in Denver.