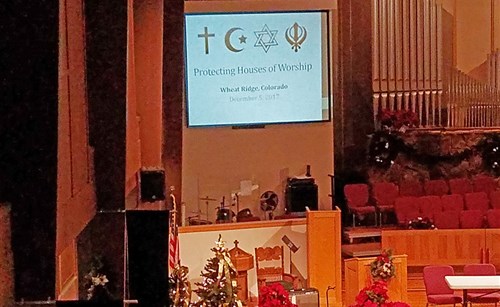 On Dec. 5, Wheat Ridge United Methodist Church and the Metropolitan District of the Rocky Mountain Conference hosted an event on congregational security. This event was put together by the U.S. Attorney's Office, the FBI, and Homeland Security. Close to 300 individuals attended from congregations throughout the metro area, representing all walks of faith.

Bob Troyer, of the U.S. Attorney's Office for the District of Colorado began the evening by reminding us that "congregations are the most resilient fabric of our communities. But it is important to have a realistic assessment of the assets which each congregation has."

Later in the evening, Dilpreet Jammu, a practicing Sikh and chairperson of the Interfaith Alliance of Colorado, stated that two extreme positions are often expressed. He said, "on the one hand are those who think the answer is for churches to arm themselves and on the other hand are those who believe that church should just leave this in God's hands." Dilpreet stated that as Sikhs, they have an open door policy with no armed guards or guns. As a religious minority, who clearly stand out because of their head dressings, they are in a particularly vulnerable position as they extend hospitality to all.  And yet, even with this tension, they are able to embrace certain common sense practices which minimize the risks of violence.

"It is important to have a realistic assessment of the assets which each congregation has." - Bob Troyer


We were reminded by Todd Sandstedt, FBI, that 95 percent of the work of security teams are with non-violent situations, such as health emergencies, fire alarms, helping individuals in locating the restrooms, jumping a dead battery in the parking lot, and/or engaging individuals who seem disoriented with mental health issues. Sandstedt reminded us that the vast majority of churches do not have the resources to hire security, nor would they even if they could.

Most of the security teams are comprised of volunteers, made up of the ushers and selected individuals. It is crucial for the security team to have practices in place for any emergencies which might occur, whether violent or not. If a security is to have a concealed weapon, it should only be by those who are highly trained. There is as much danger, if not more, by untrained parishioners carrying guns.

The following are some specific actions that can be made by every congregations: Finally, as much as we can work for adding security for our congregations, let us never forget that our first priority is to be disciples of hospitality welcoming the strangers and the Other, for only then can we truly entertain "angels unawares".  Let us live into the risks of life with grace, with boldness, and with courage.